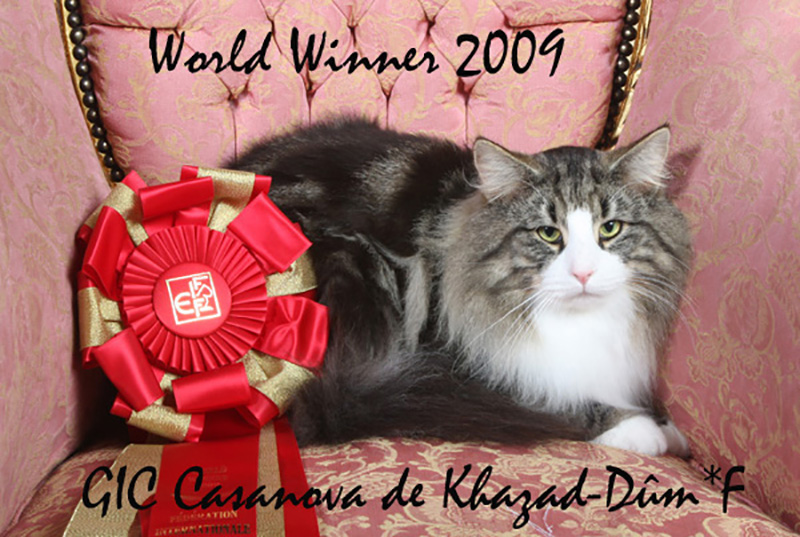 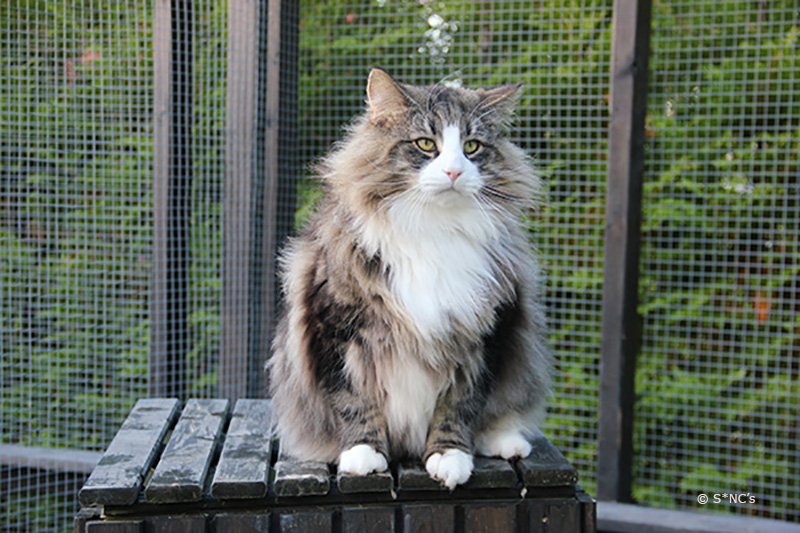 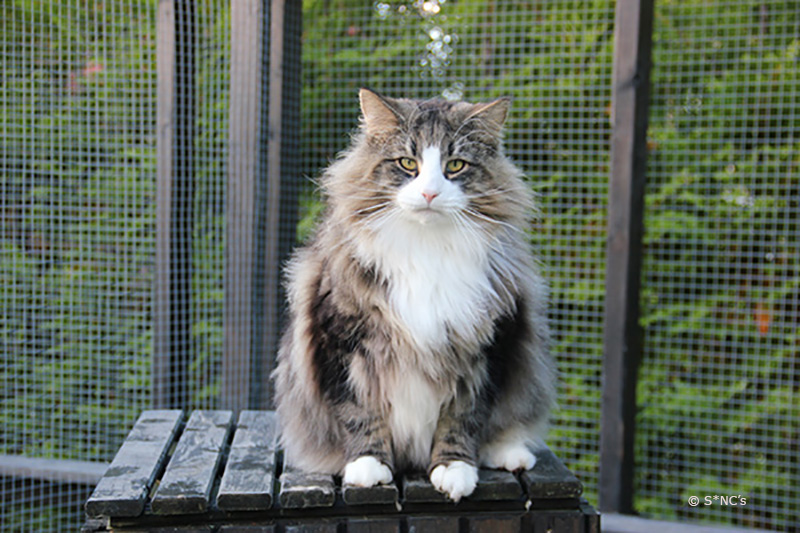 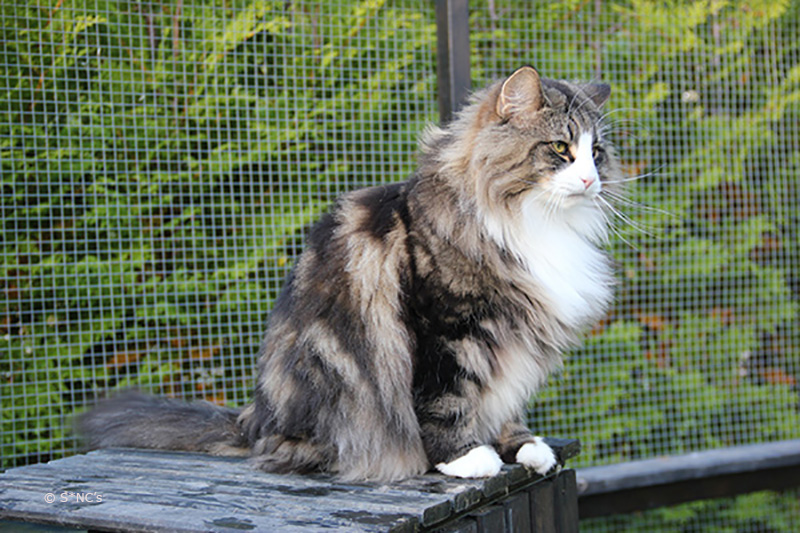 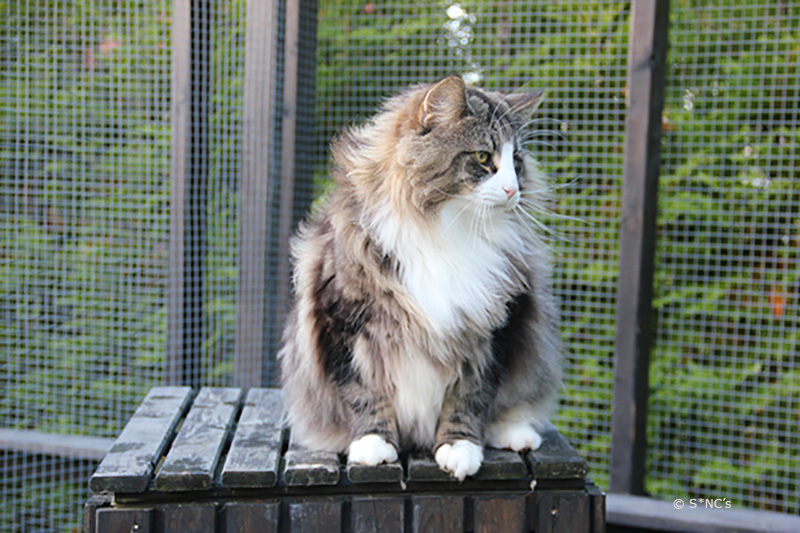 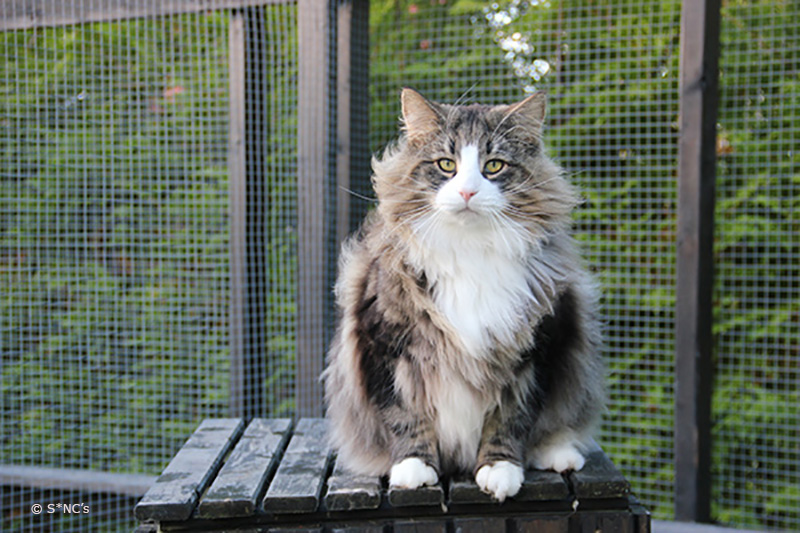 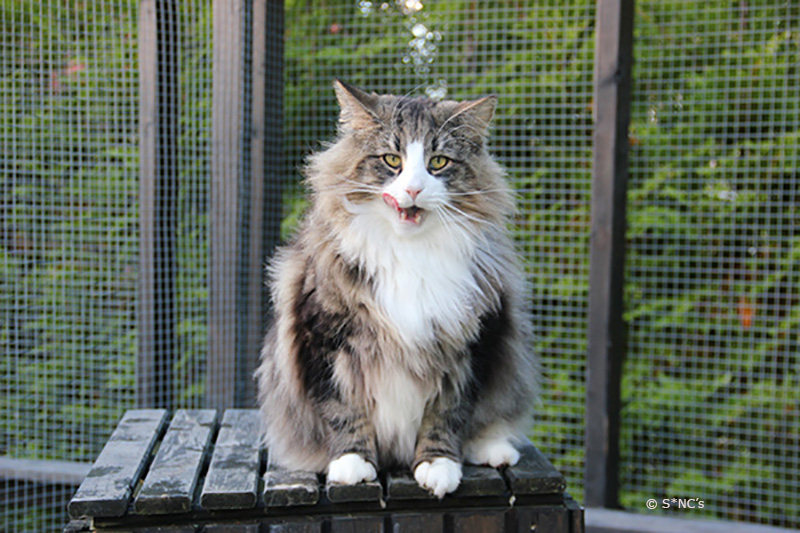 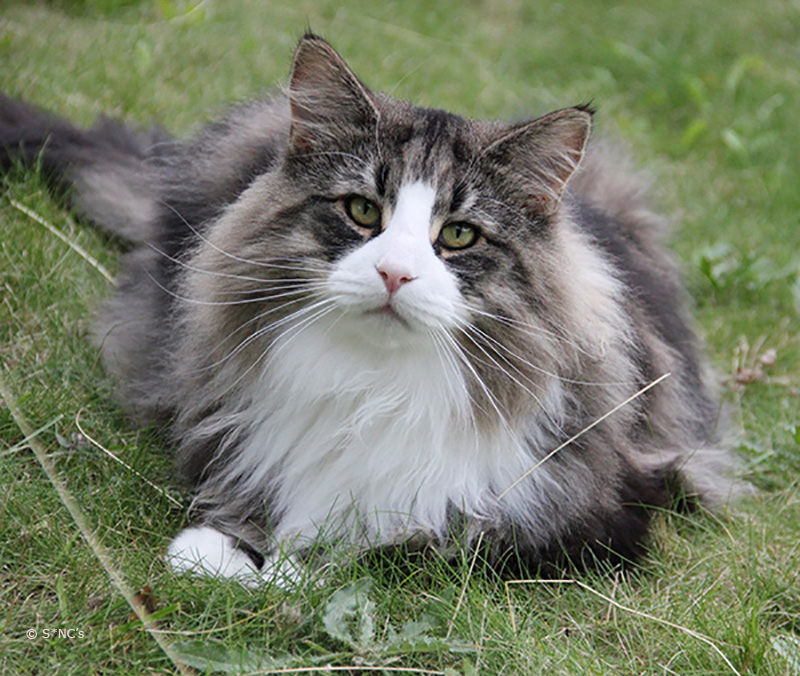 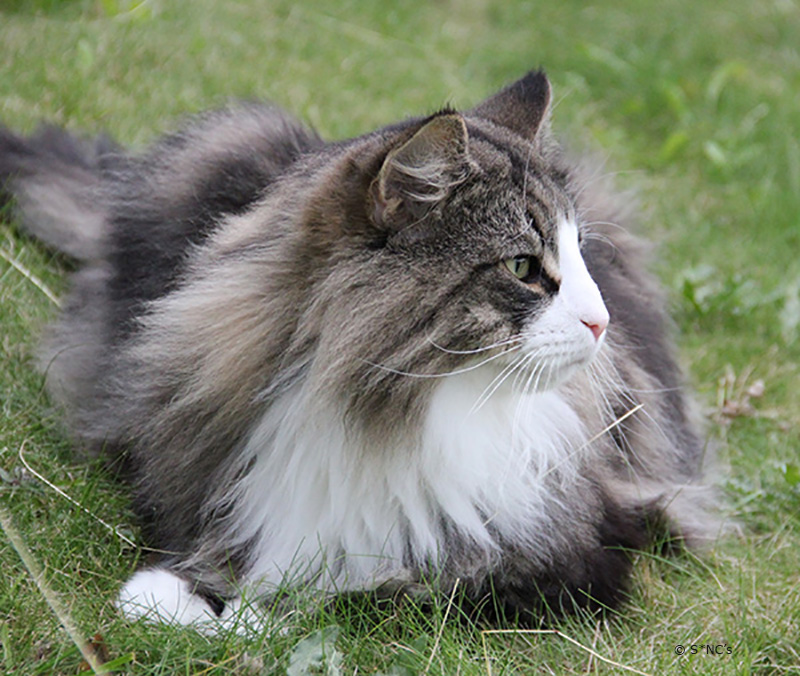 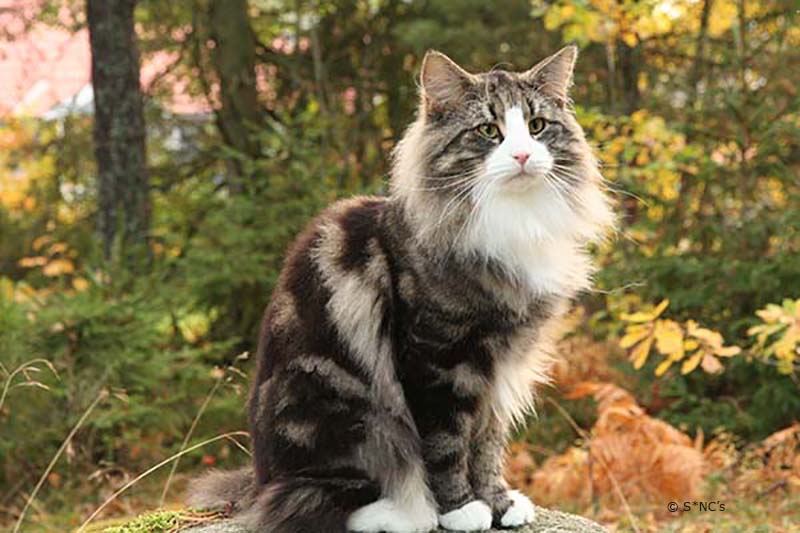 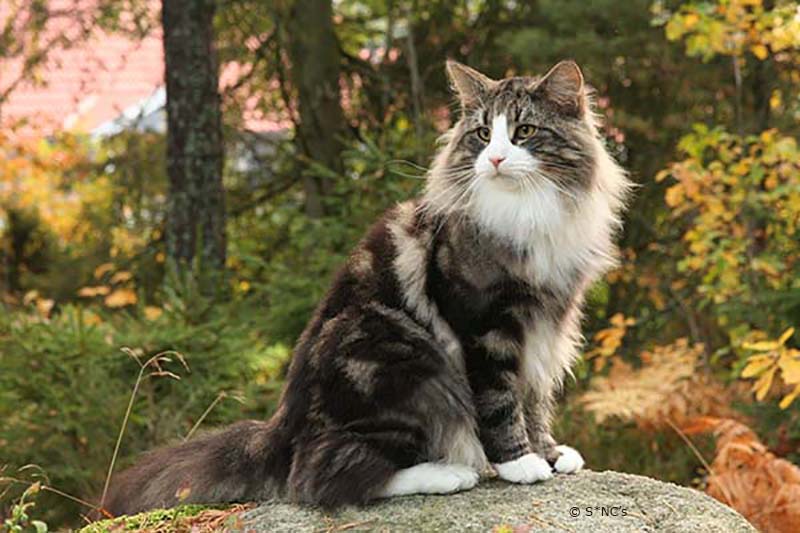 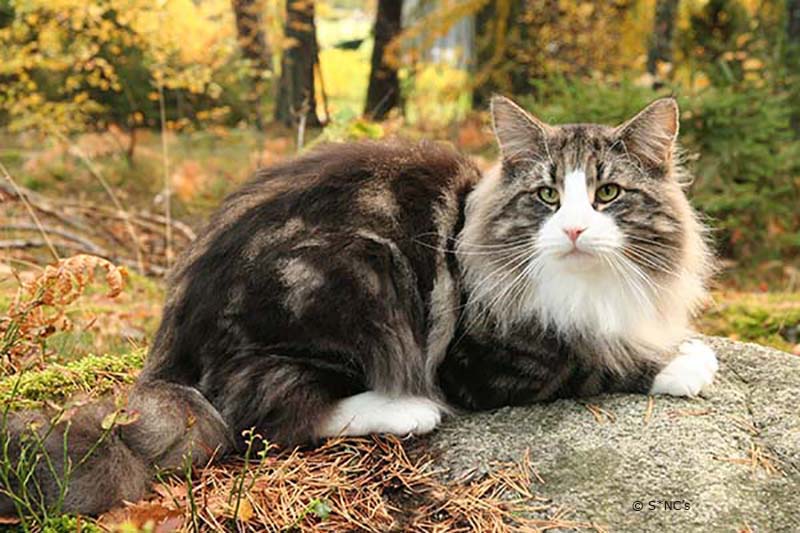 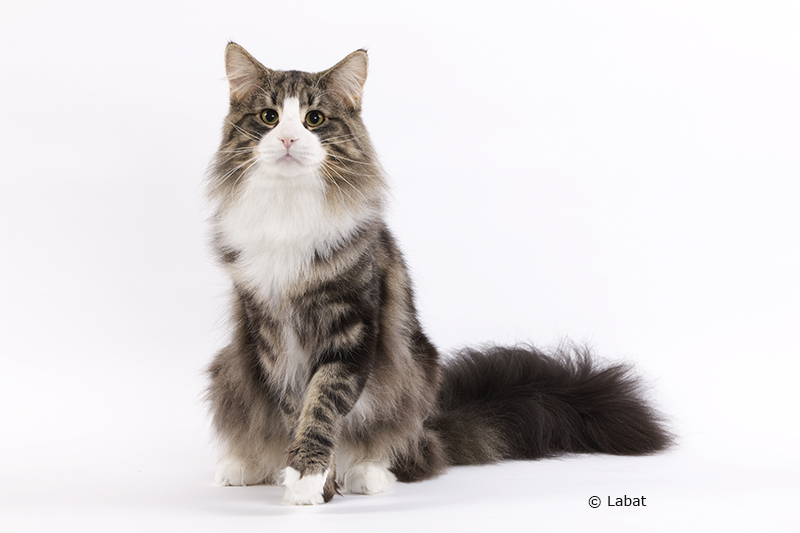 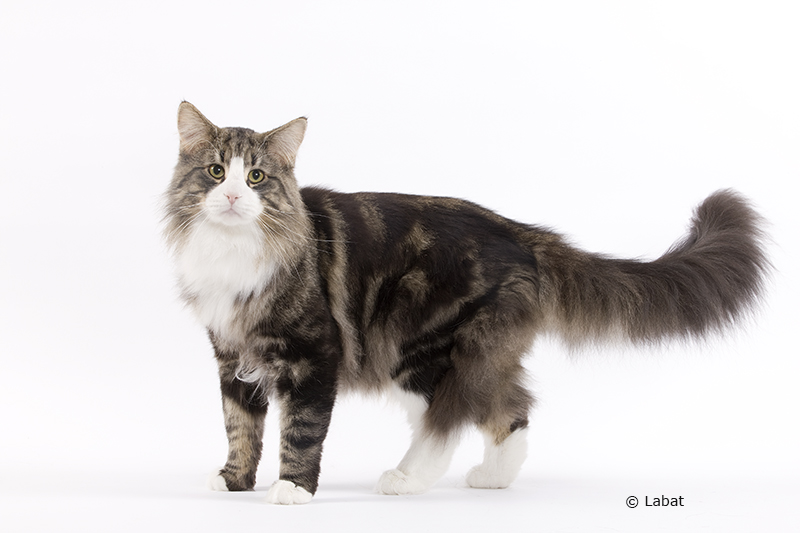 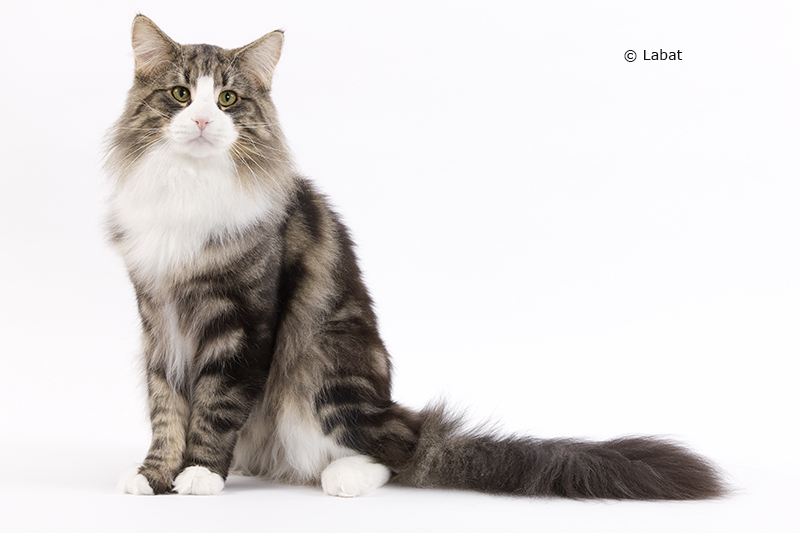 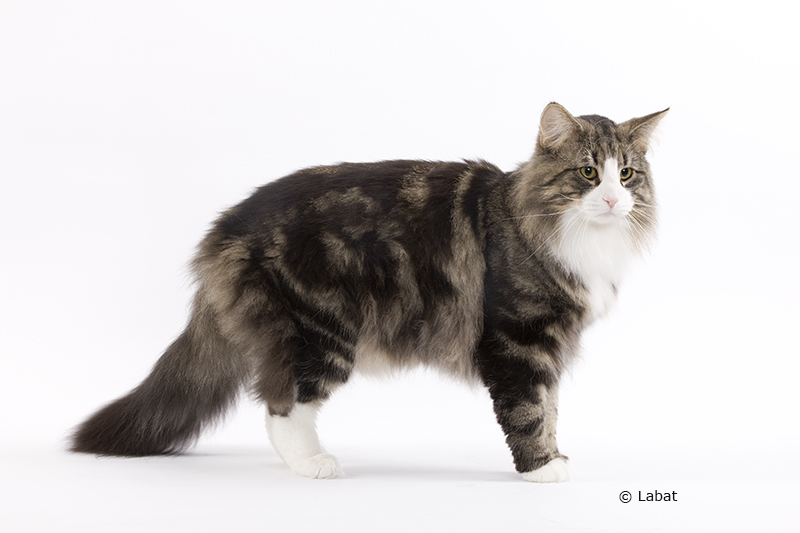 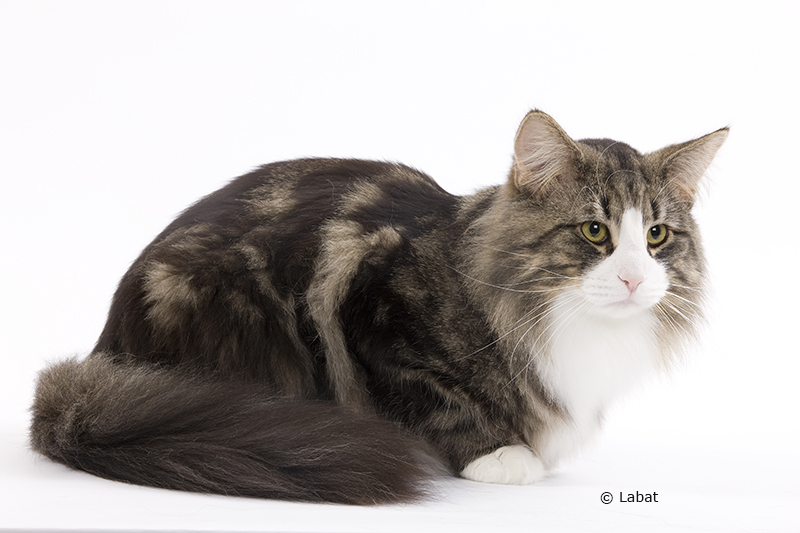 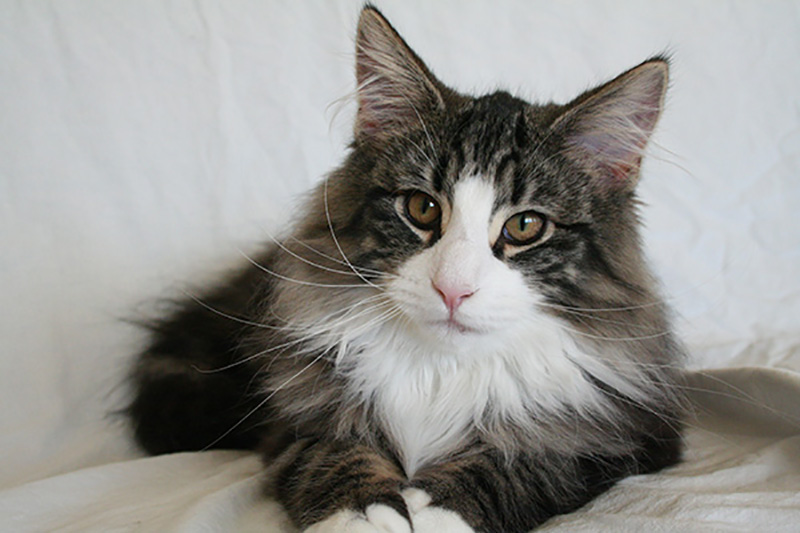 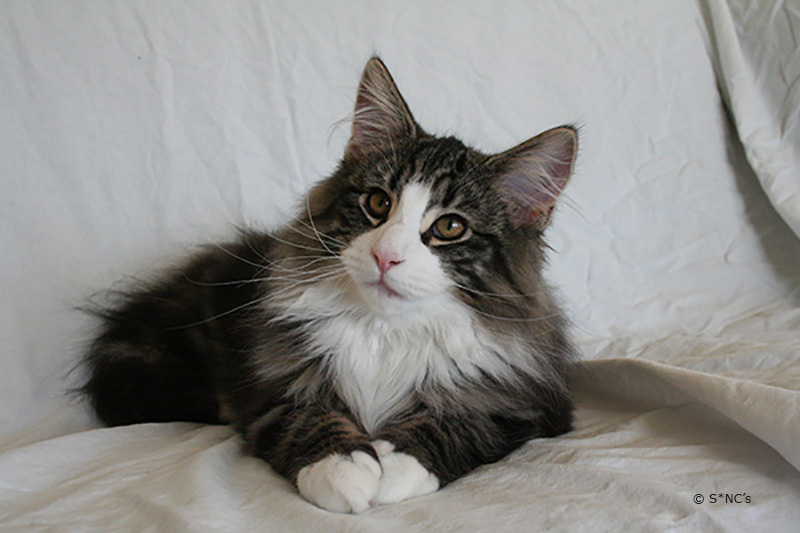 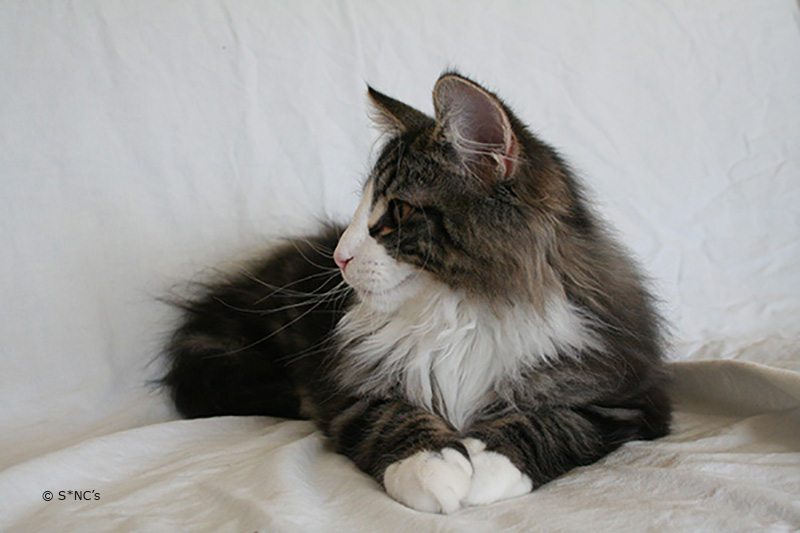 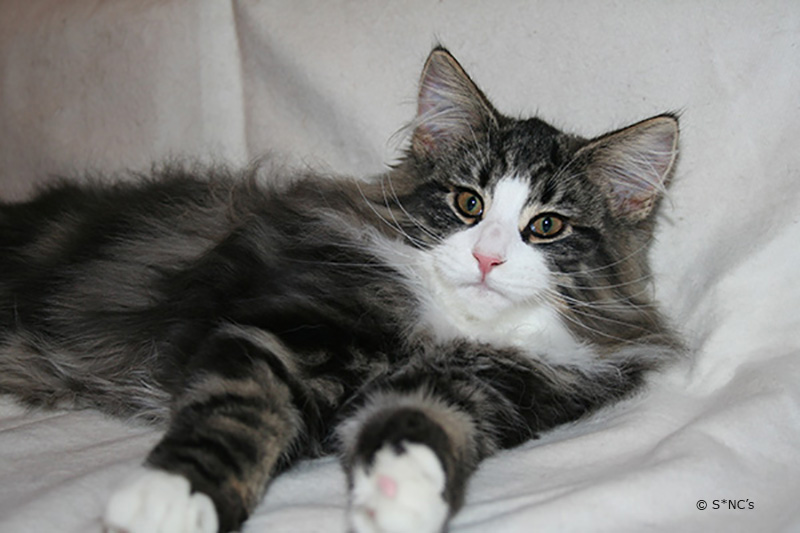 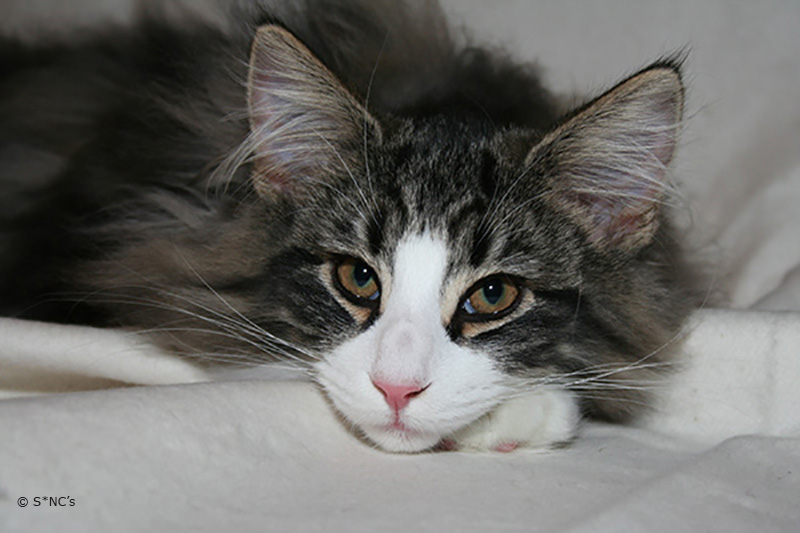 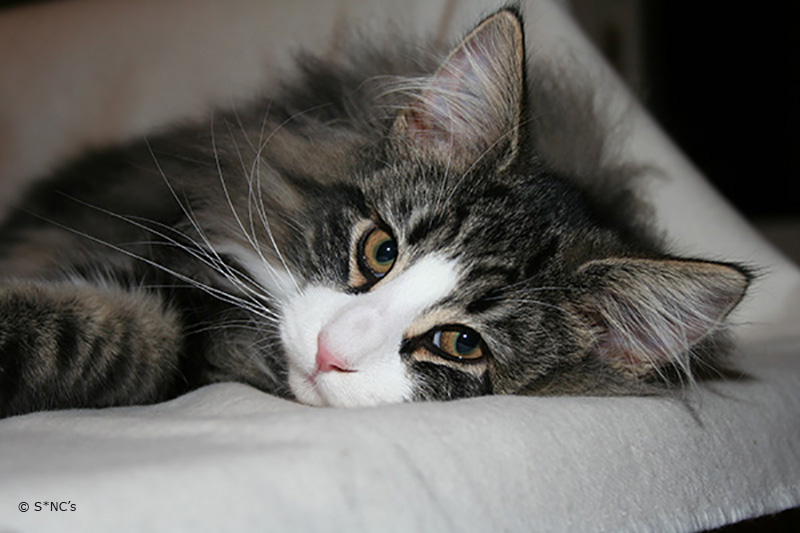 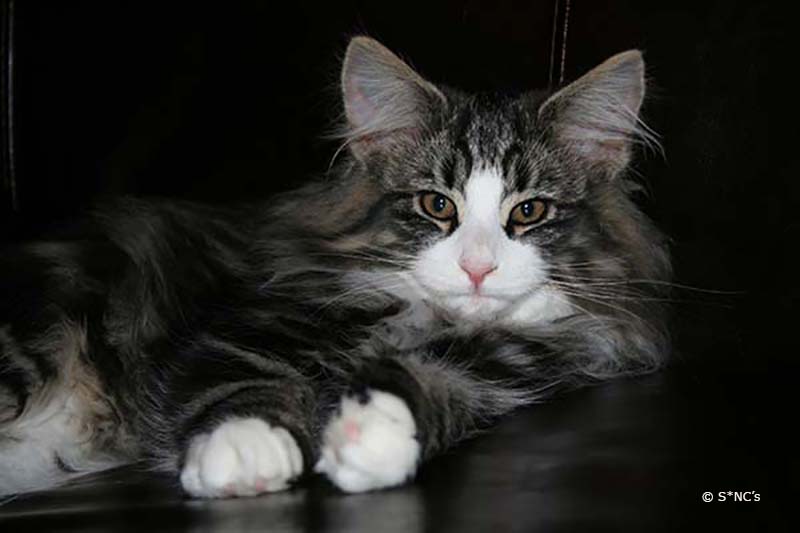 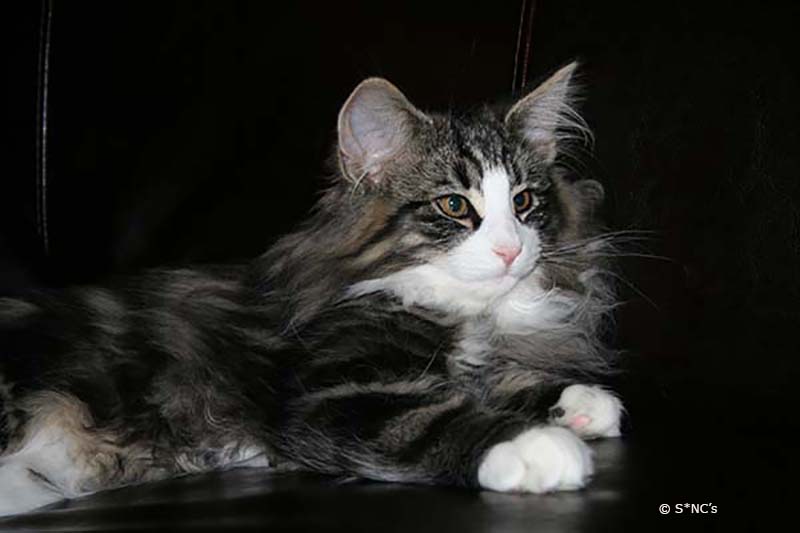 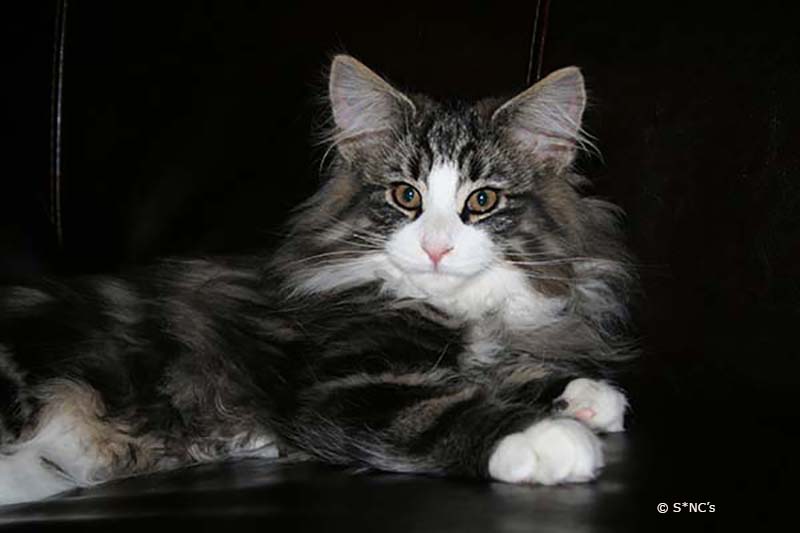 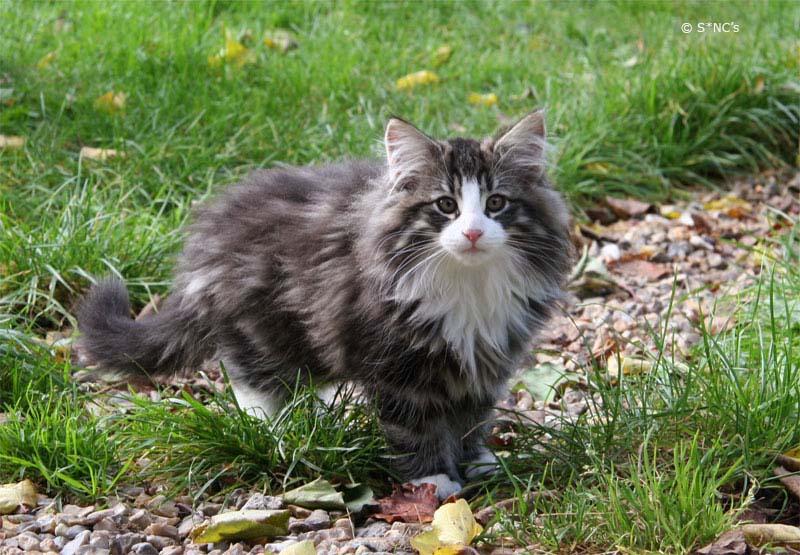 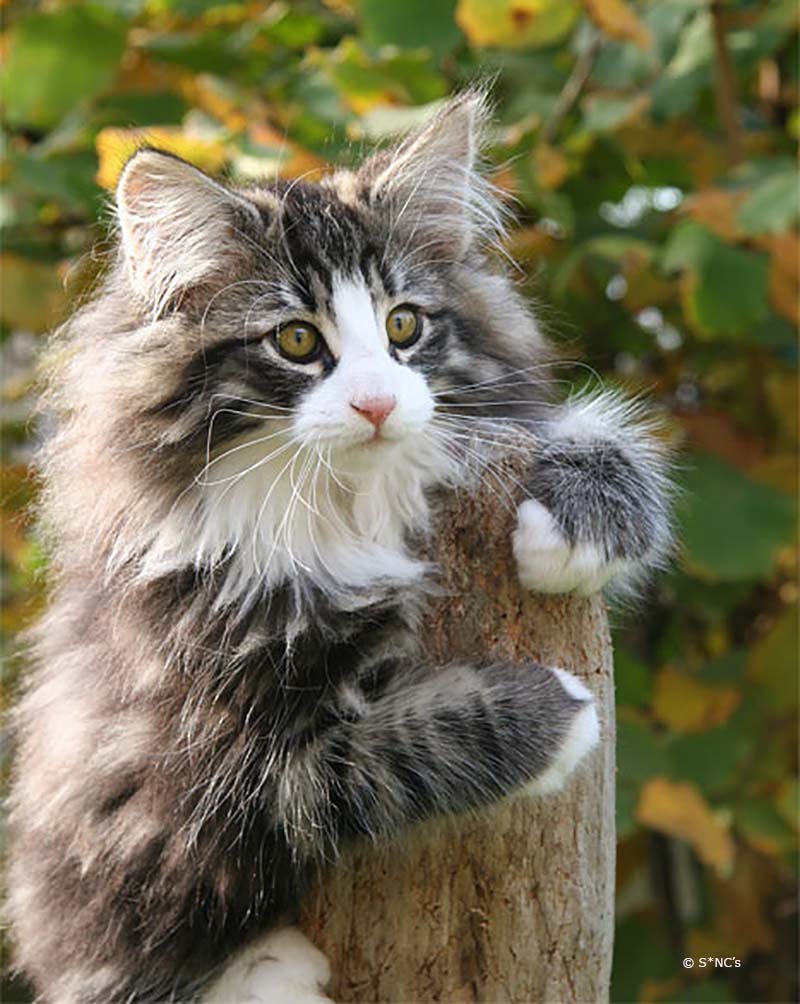 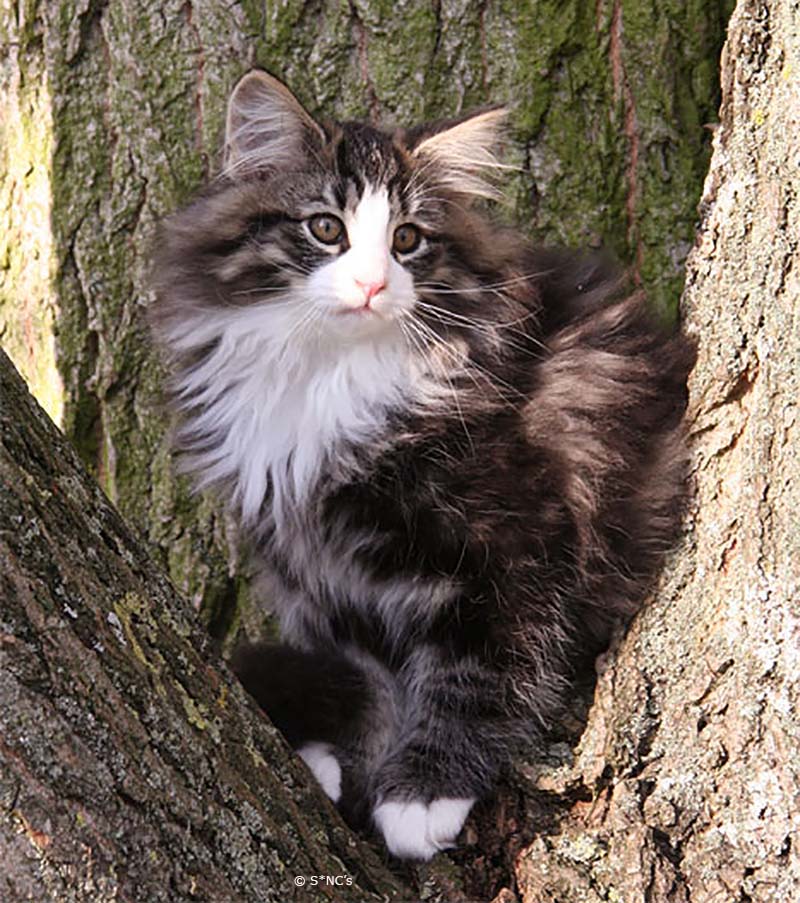 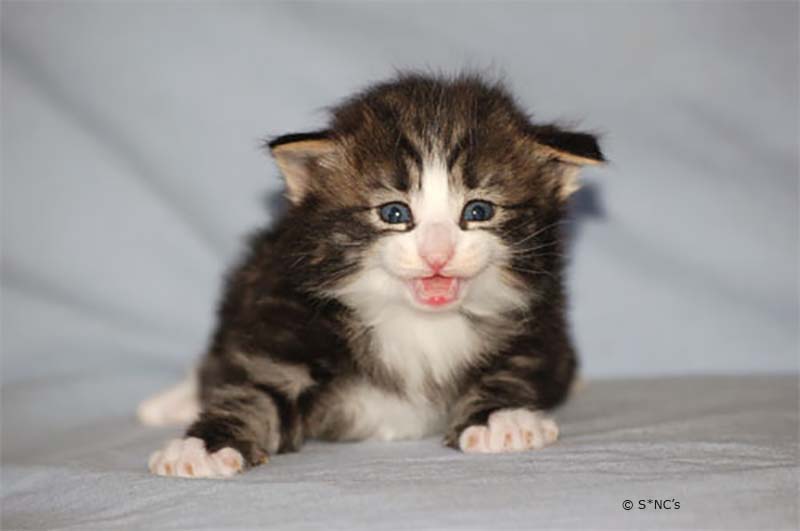 There he was, our beautiful frenchman!

After a long time looking in other countries for a new male we found him in de Khazad-Dum*F cattery with some help form friends. We really wanted something special that can give our breeding something extra both in qualities and som new lines. His mum and dad is two really fantastic cats. Casanova has many qualities that we like. He has plenty of coat and he is also a big cat already with a strong bone structure, straight profile, good chin, nice ears and he has a fantastic look! We are so thankful for his breeder Nicole Delpatrie for letting him move to us all the way to Sweden.

We can’t wait to see how the kittens between and Alma will look like! Waiting for him to grow up a little bit so that we can take him to shows and just hope that he really likes being at cat shows. During 2008 we have taken Casanova to a few shows and he got some really nice judgements. The best thing with him is his lovely temperament! He is so relaxed with all the other cats around him.

In June 2008 his first kittens was born together with our S*NC’s Cry Wolf. There was six kittens in our S*NC’s Daft Punk litter and they all looked very promising. We will follow their developments with great pleasure. In October he became father again to three lovely kittens in S*Sweet Scarlet’s cattery. After that, a new year started with six beautiful kittens at S*Restless cattery. This was his third litter so far and now we are just waiting for him to meet our princess Alma, we hope to have som kittens in spring 2009.

Before those kittens were born we had him meeting our other cat S*Sir Maxwells Singel since our plans for her changed. In May 2009 the S*NC’s Pink litter were born. Not so long after, the ones we’ve all been waiting for, Alma and Casanova had there first kittens together in June 2009, S*NC’s Queen litter. The combination between them two became very nice and successful, not least the kittens developments, but also Casanovas. In 2009 Casanova become World Winner just like Alma in 2008. So who could ever have guessed that there were going to be two World Winners as parents to this litter?

Moving on in 2009/2010 the S*NC’s Queen litter has haved just fantastic results on a lot of cat shows. Four of the kittens became Junior Winners, these were S*NC’s Back Chat, S*NC’s Invisible Man, S*NC’s Killer Queen and S*NC’s Cool Cat. We are so proud of them all!!!

Casanova has also became father in other cattery’s. First it was FoxyPaw’s cattery in Finland, then it was two cattery’s from Sweden, S*Eärfala’s and S*Robäcken’s cattery. His last litter outside our own cattery was born in a cattery called des Iles Lofoten*F (also the cattery that our other male from France, Drangedal is born). We hade one more litter with Casanova between S*NC’s Words Unspoken and this litter was namned after the pop queen, S*NC’s Madonna litter. There were two males and three females.

As we move forward in 2012 Casanova had two more litters. The first one was in SE*Storytail’s cattery, and the second one was in our own cattery. This litter was called S*NC’s Boney M litter. For the first time ever we had got solid kittens, two females and one male. It was not planned to keep a kitten form this litter, but we couldn’t resist the most wonderful male kitten, S*NC’s Rasputin. Rasputin or Zac as we called him now lives at DK Catwazaki’s in Denmark and we are so happy that he got to move in with Karina Pandell, since he didn’t fit in our cattery.

In 2014 we decided to repeat the mating between Casanova and Alma. So in the beginning of the year we had four kittens in S*NC’s The Ark litter. One of them were S*NC’s Calleth You Cometh I. He was a male with a very special type and he just had to stay. At the same time he became father in S*Räserråttans cattery in Sweden. The kittens from both this litters has been strong NFO cats.

In July 2014 he had his second litter together with S*NC’s Words Unspoken. There were four kittens born in the S*NC’s Rihanna litter. In October 2015 we repeted the mating between him and S*NC’s Words Unspoken again and this time there were six kittens in S*NC’s AC/DC litter. This was Casanovas last litter and he became a neuter boy in May 2016.

We had hoped for many more years together with ”Casa”, but instead he became very ill in december 2016 in fat liver and did not make it. He became 9 years old. It was a great loss for us! This was not what we expected and we will always remember him for the big teddy bear he always was. He gave his kittens the best temperament you can ever hope for and we are now so happy that we can follow his offsprings all around the World.

Casanova was tested for HCM 2008, 2009, 2014 and his heart was normal. GSD IV-negative (both parents are tested negative). PK-def negative