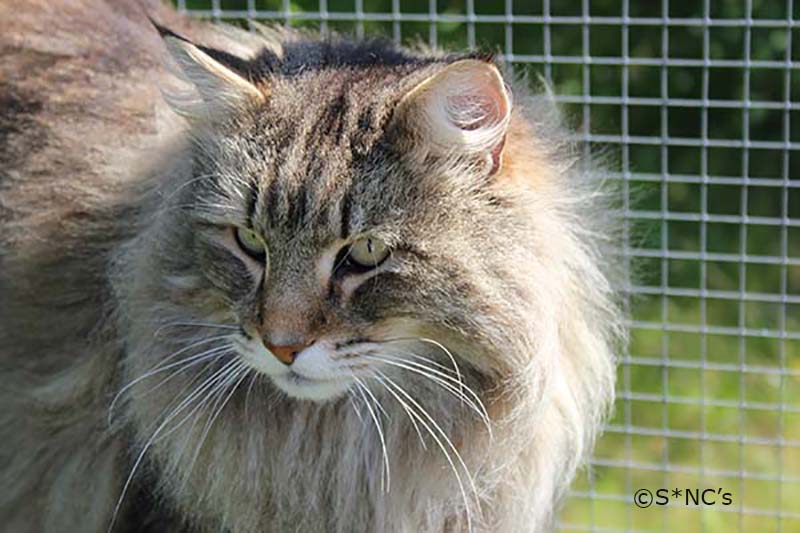 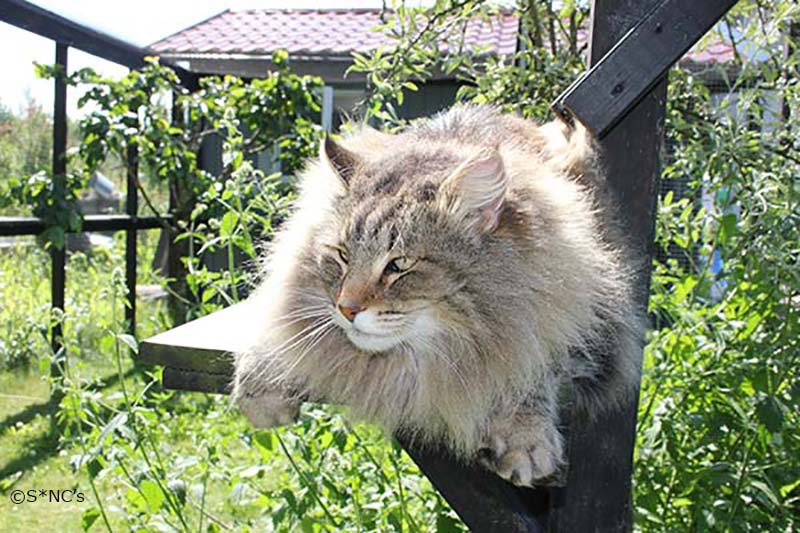 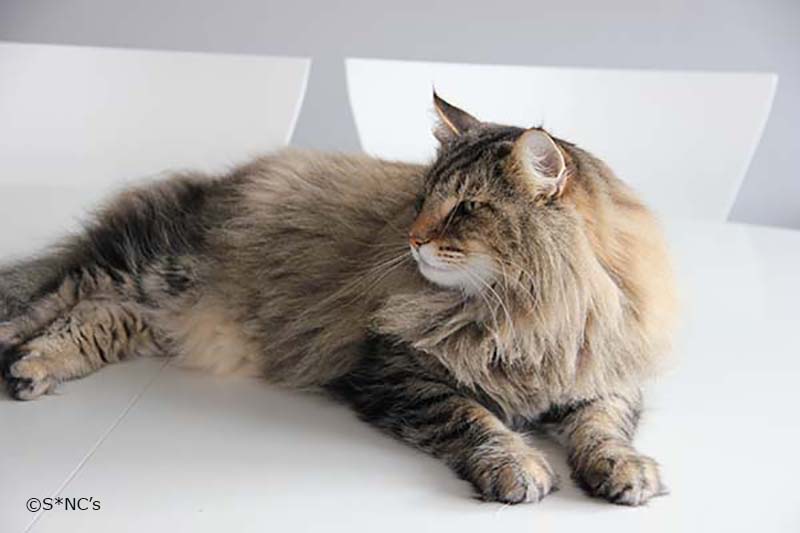 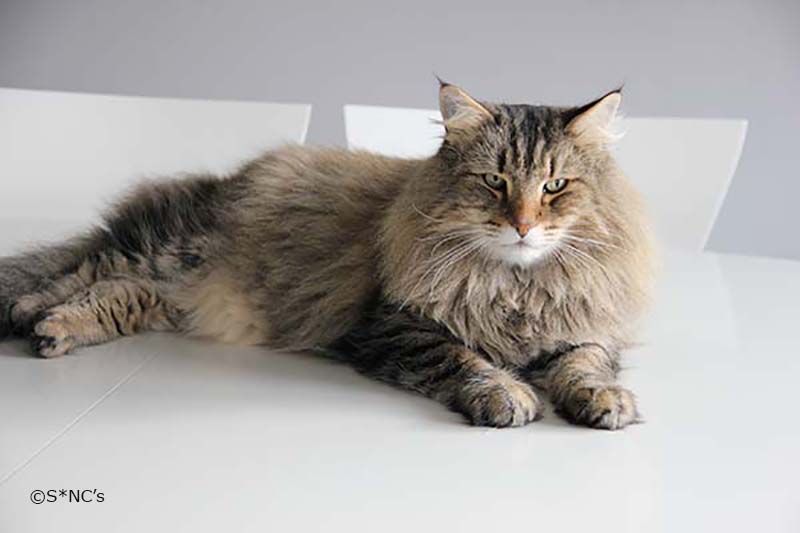 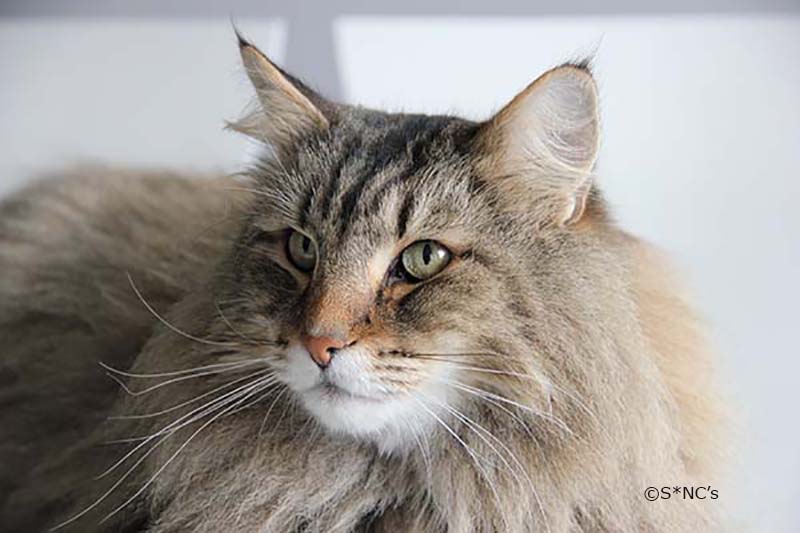 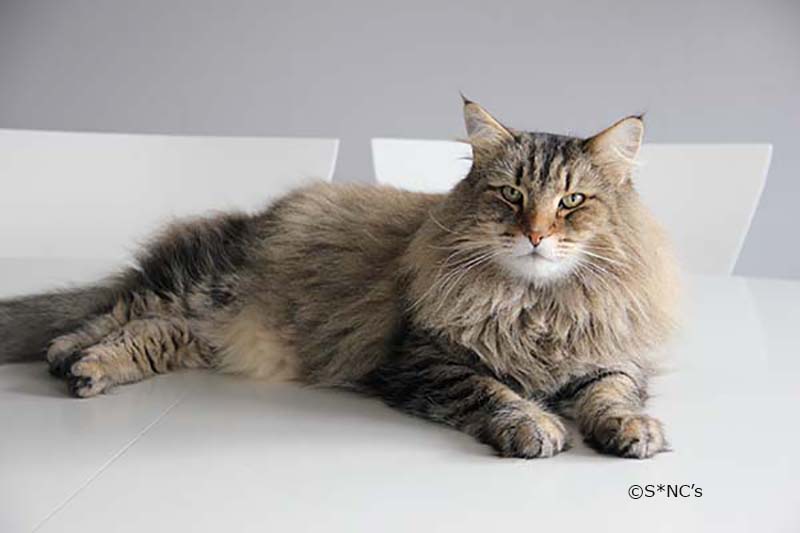 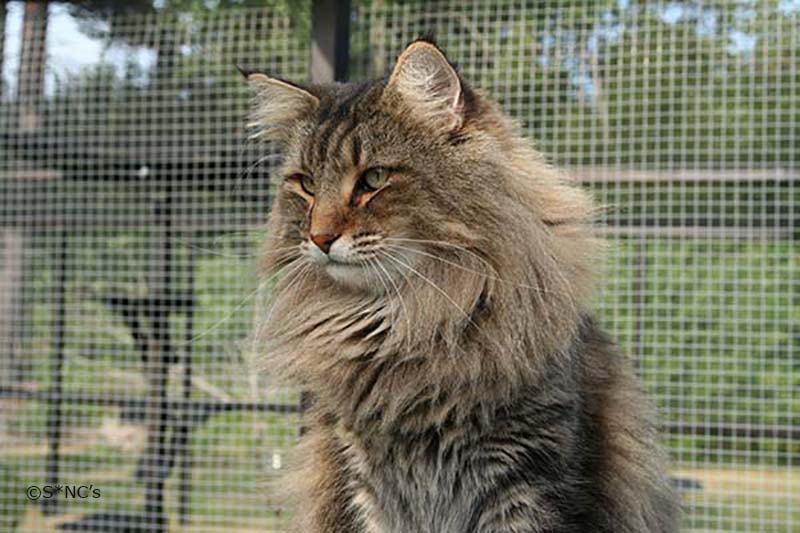 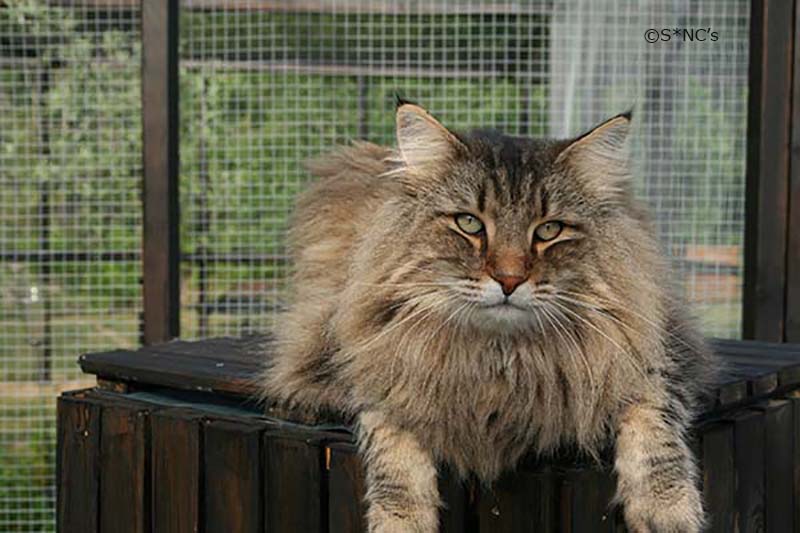 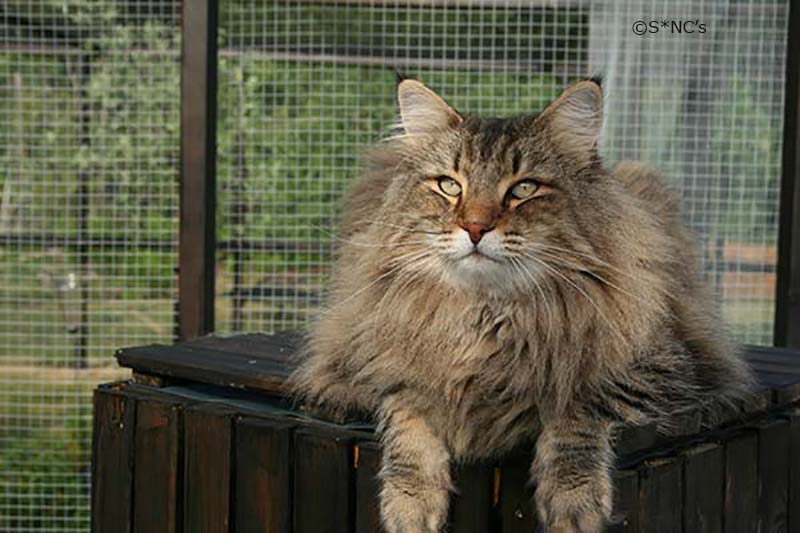 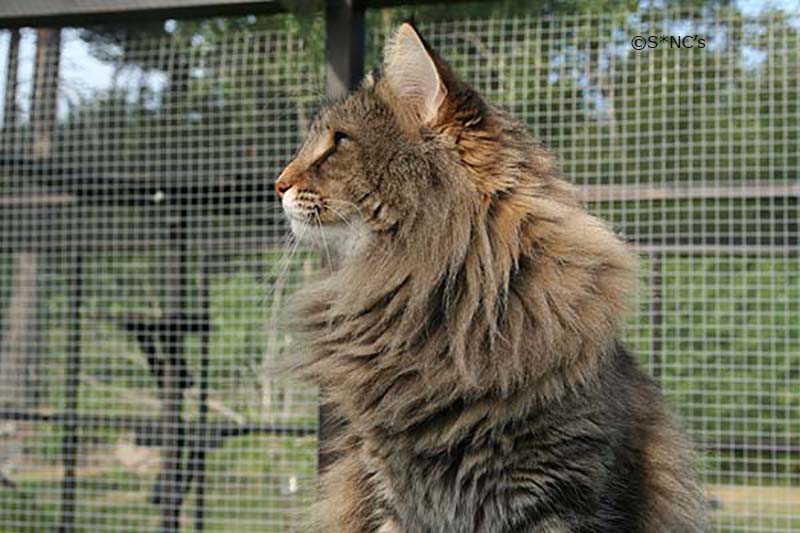 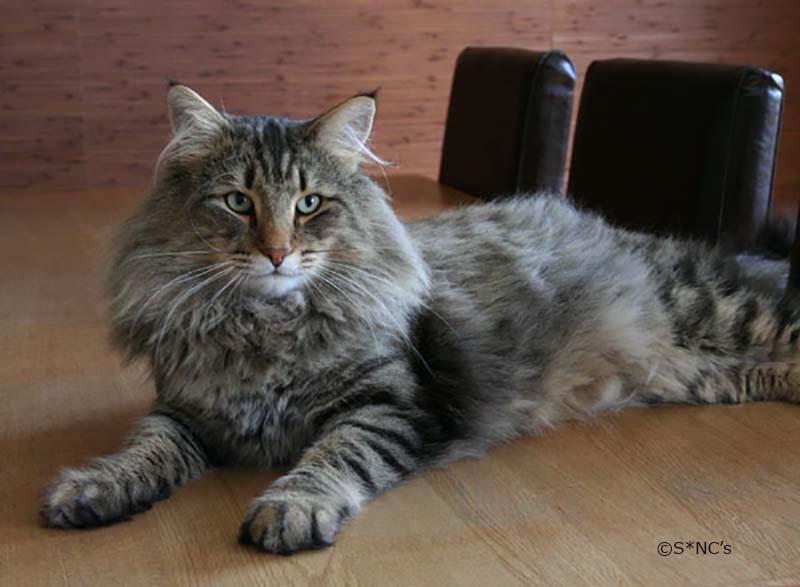 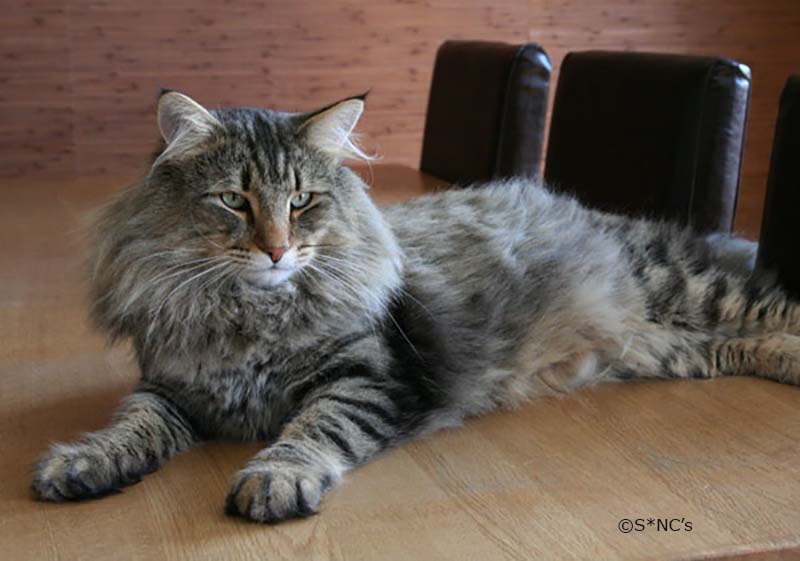 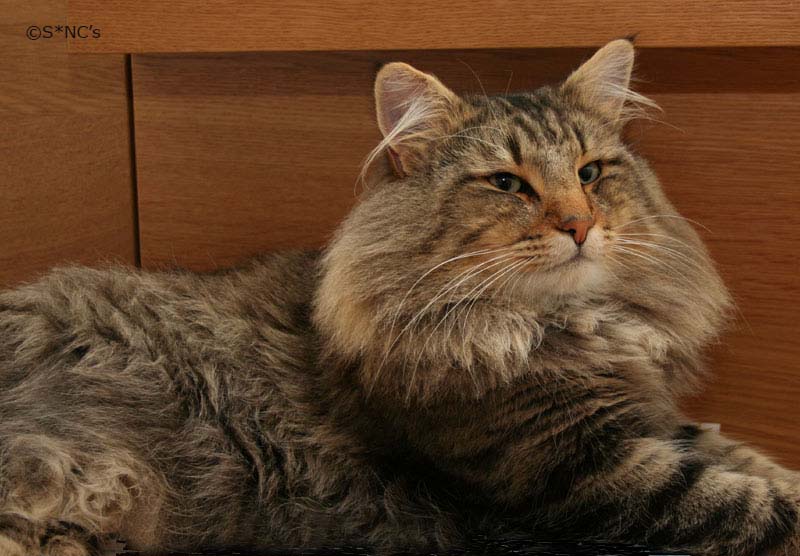 Leo as we call him was born in the S*Restless cattery in Härryda, outside Göteborg. He was one of the males in the X-litter. There he was waiting for us because he was the only one left for sale. In January 2005 we took a trip to Göteborg to take him with us. Now he lives in Bålsta with us and we are so happy that we could have him.

At his first catshow in february 2005 he got Ex1 and BIV-total. Then it became more shows. It can be long days of course but when he’s back home he can play with his catfriends in the cat yard. His favorite friend is Singel and they have lots of fun together. When the weather is nice they stays out and play the hole day long.

When it’s time for bed he always will sleep next to his mistress. He wants to be fondle with until he’s satisfied otherwise he will push with his nose for more. Next morning it’s the same procedure until it’s time for breakfast. After breakfast it’s time to go out and play again.

Leo is a very beautiful cat. He has got the lenght and he is also high with a long bushy tail and we think he’s got the look! He is a cat that talks a lot. When you call out for him he will answer you with his special way of talking. We are so found of him and we are sure that he will give us great offsprings in the future.

Finally Leo got his first litter 2005-12-26, with GIC S*Solfjäderns Love (Flingan) in S*Pole Position’s cattery. Flingan lives not far away from us so we will be able to follow this litter very close. His second litter was born in Norway 2006-01-13, with IC (N)Poten’s Dizzy in (N)Bytangen’s cattery.

In January 2006 Leo got the Champion title. We also went to Norway for his first Norwegian CACIB and he managed that to. Finally, in March 2006 we had our first litter in our own cattery. Leo and S*Sir Maxwell’s Singel gave birth to four lovely kittens in S*NC’s KISS litter.

In September 2006 he became Grand Internationell Champion. We will continue to show him at catshows as long as he likes it.

In february 2007 Leo also became grandfather to the beautiful kittens in  S*NC’s A-ha litter. The mother is S*Sir Maxwell’s Singel and the father is Leo’s beautiful son IC (N)Bytangen’s Asgeir from the (N)Bytangen’s litter.

In the end of June 2007 Leo became grandfather to four little kittens in (N)Flyttikattas cattery, the mother is (N)Fyttikattas Eva Rosenkrantz and the father is Leo’s son (N)Bytangen’s Asgeir.

In July 2007 he got six grandchildrens in (N)Tumay’s cattery, the mother is Leo’s daughter S*Pole Position’s Canary Wharf and the father is (N)Quinsy’s Santo.

In January 2008 he became grandfather in (N)Gule Huset’s cattery and in (N)Norodden’s cattery.

In March 2008 our dreams came through, Alma and his S*NC’s Supertramp litter was born and they got seven beautiful kittens. There were five girls and two boys. One of the girls were blue & white and there was somthing special about her so we had to let her stay. Her name was S*NC’s Words Unspoken aka ”Blåbär”. She became very successful on shows and became Junior Winner. Two other siblings that also got this title were S*NC’s Sooner Or Later and S*NC’s Sister Moonshine.

The same year he also became father in Norway with (N)Fodnaheia’s Zoe that lives in (N)Howlid’s cattery.

This was his last litter and he became neutered the same year. We hope that he now will have some time, thinking about other things than girls!

Leo had eight more years as a neutered male but sadly we had to say goodbye to him in June 2016. Leo became 12 years old and was one of the most beutiful Norwegians that I know about. Leo was the beginning for S*NC’s cattery and our breeding of Norwegian Forest Cat. Thank you Leo for everything you have given us.