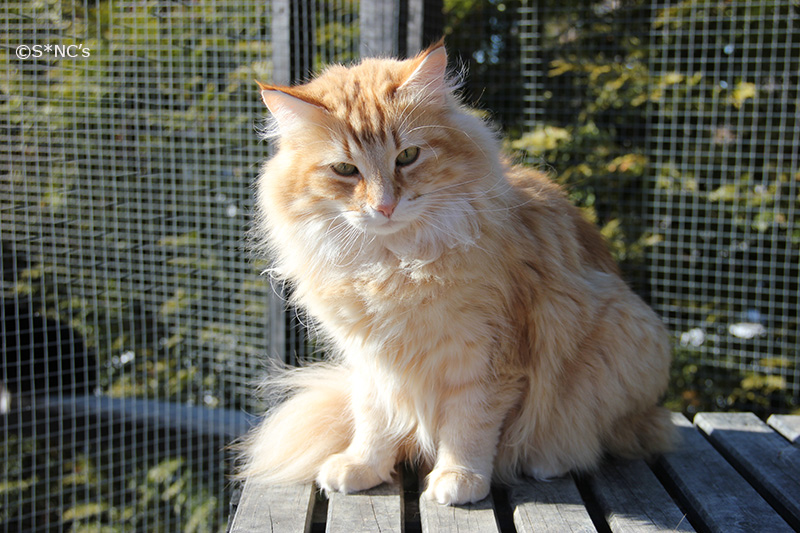 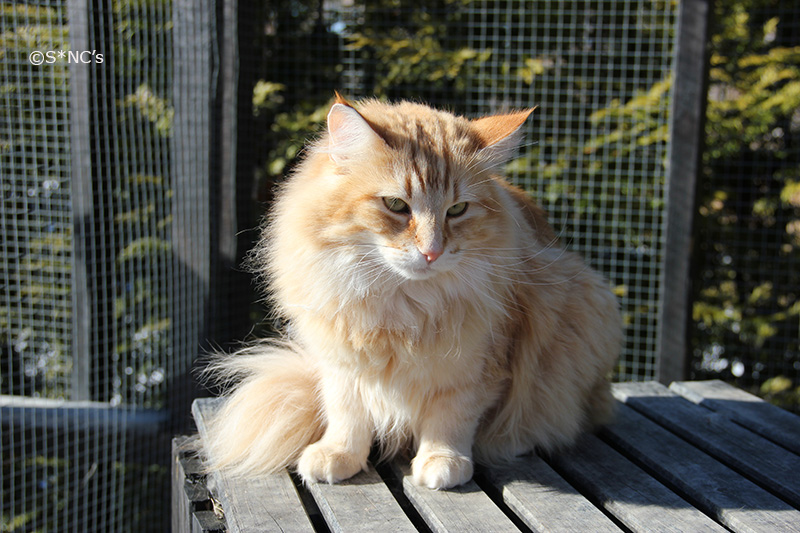 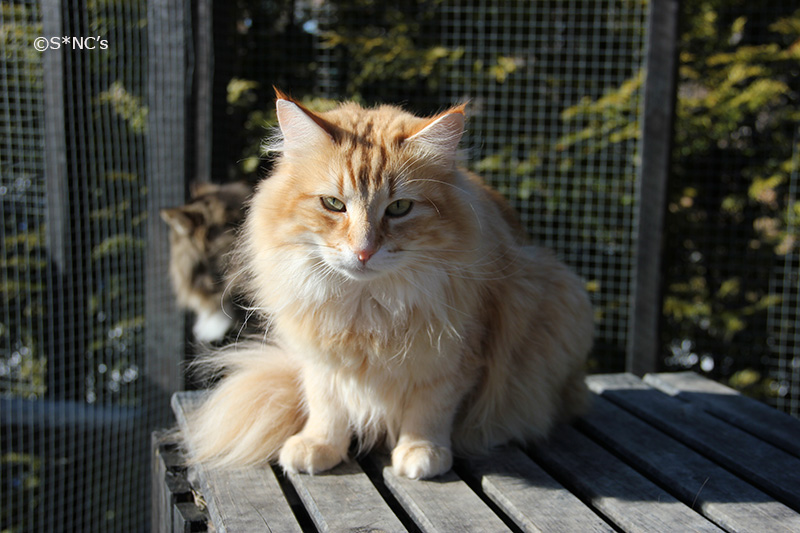 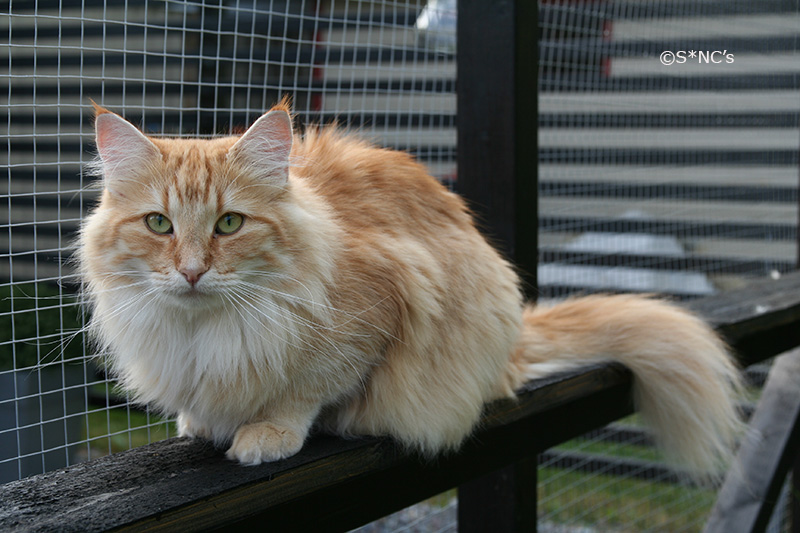 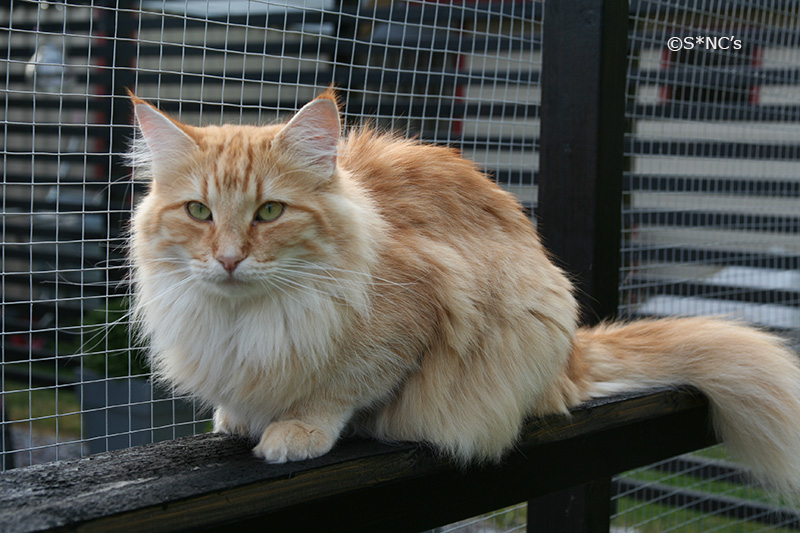 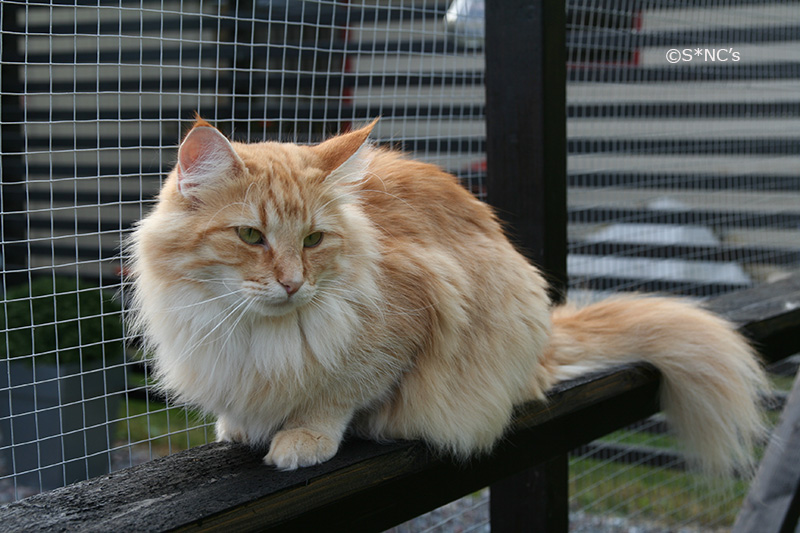 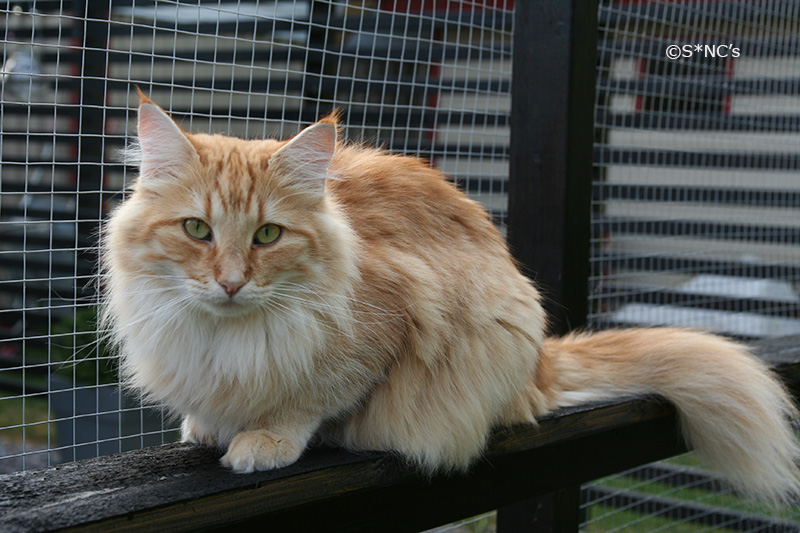 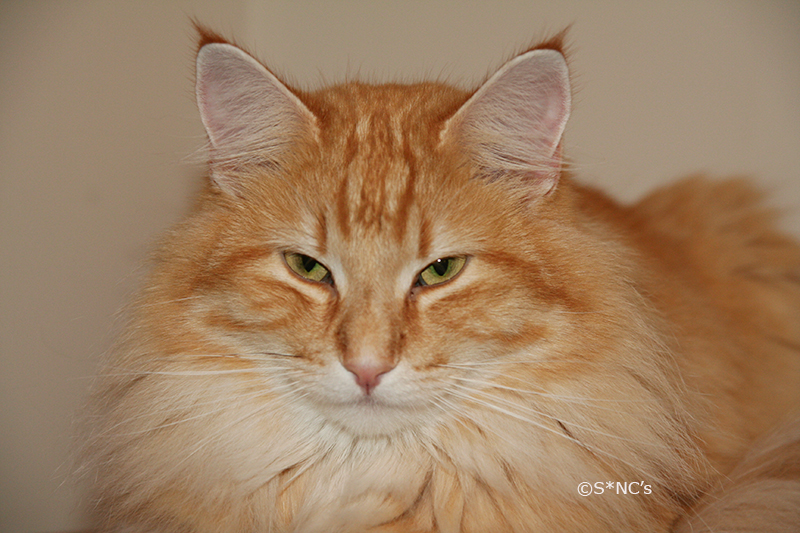 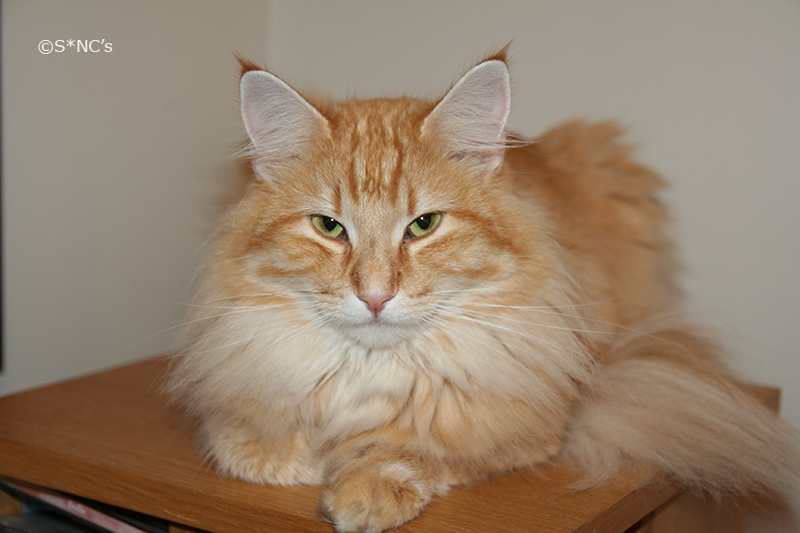 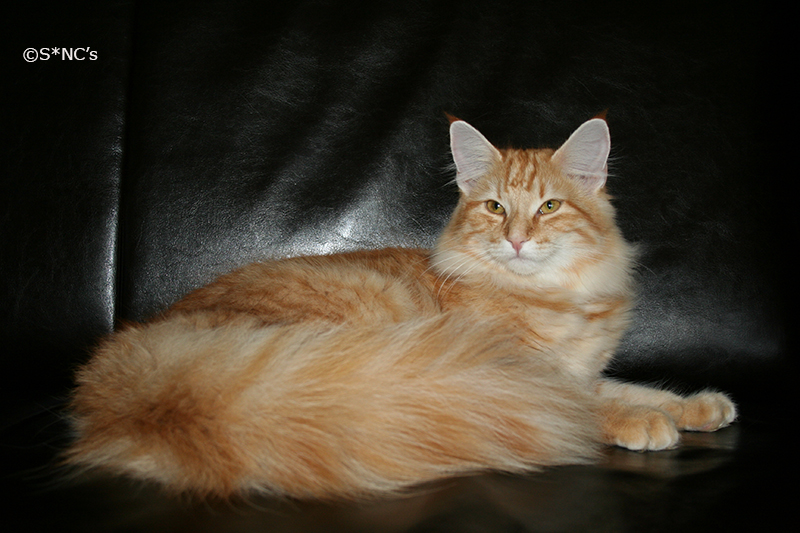 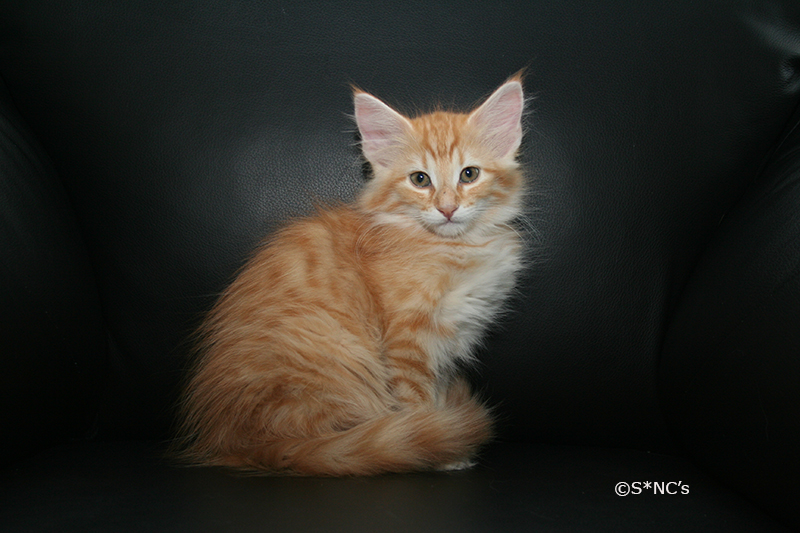 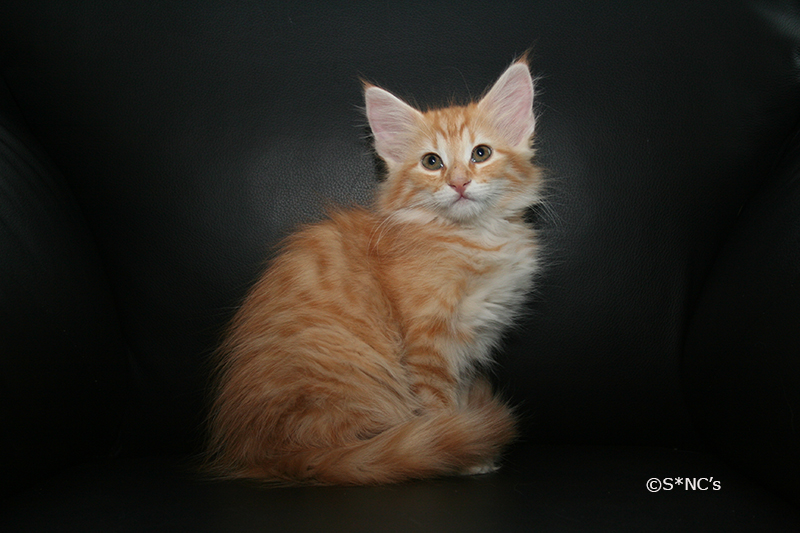 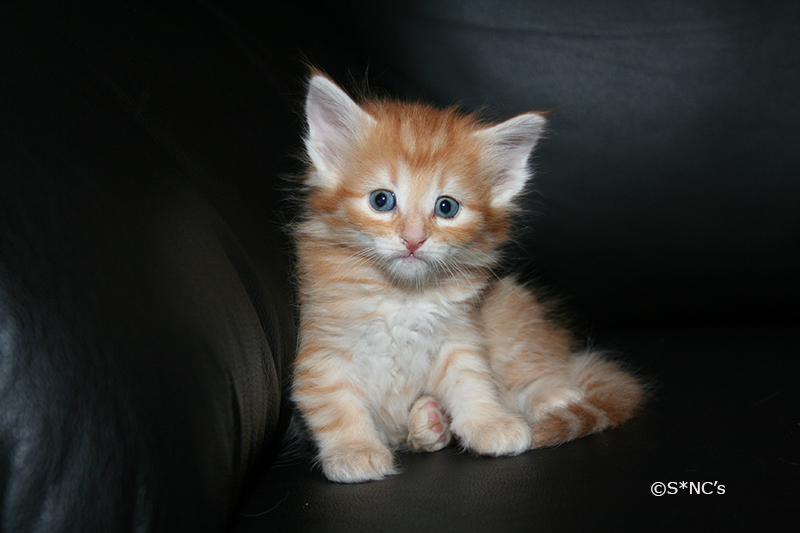 When we decided to mate our beautiful lady, S*Sir Maxwell’s Singel for the second time, we started to look for a red male. After a while we found him in (N)Bytangen’s Asgeir. Asgeir who is a son to our own male S*Restless Nightcrawler, has the complements that we were looking for.

In our third litter, S*NC’s A-ha litter, born 2007-02-23, there was seven kittens but only one girl. This girl was all over red and we liked her a lot, S*NC’s Cry Wolf. We decided to wait and se her development and we were very pleased what we could see so we decided to keep her in our own cattery.

”Nova” as we call her, has alredy been at some catshows with very fine results. In the future we will let her meet some of our boys.

In June 2008 she got her first kittens together with our beautiful french male Casanova. They got six lovely kittens in our S*NC’s Daft Punk litter. Some of them has been at catshows with very good judgement and they seams to have the same calm temperament at shows like their father Casanova.

As soon she will be in showcondition, we will take her to some shows again and in the end of 2009, maybe she will meet our handsome Drangedal.

The plan we had became real when the kittens between Drangedal and Cry was born 2009-11-25. The litter was named S*NC’s Michael Jackson litter. There were six kittens, five males and one lovely tortie girl. We decided to keep one male S*NC’s Man In The Mirror, in the cattery, since we have all the cats that we have built up our breeding with.

2011 we let her meet our boy Drangedal once again, S*NC’s Rolling Stones litter.  In this litter there was four kittens, Three males and one female. In february 2012 S*NC’s Sweet litter was born. Four females and one male. This time the father was S*Eärfala’s Dante who is a son of Casanova.

2013-05-23 she had her second litter with Casanova, S*NC’s Chicago litter and they had four kittens this time, one female and three males. Her last litter together with our boy S*NC’s Calleth You Cometh I, was S*NC’s Eurythmics litter.  They was born 2015-04-17, four males and one girl.

After this litter it took her long time to get back in condition and she started to loose some weight. We consulted our veterinary and after some tests the vet found out that she had anemia. After this she became more and more week and we decided to let her go.

S*NC’s Cry Wolf became nine years old and we are very thankful for all nice offsprings that she has given us during theese years.

In April 2008 she was tested for HCM and her heart was normal. PK-def and GSD IV-negative.