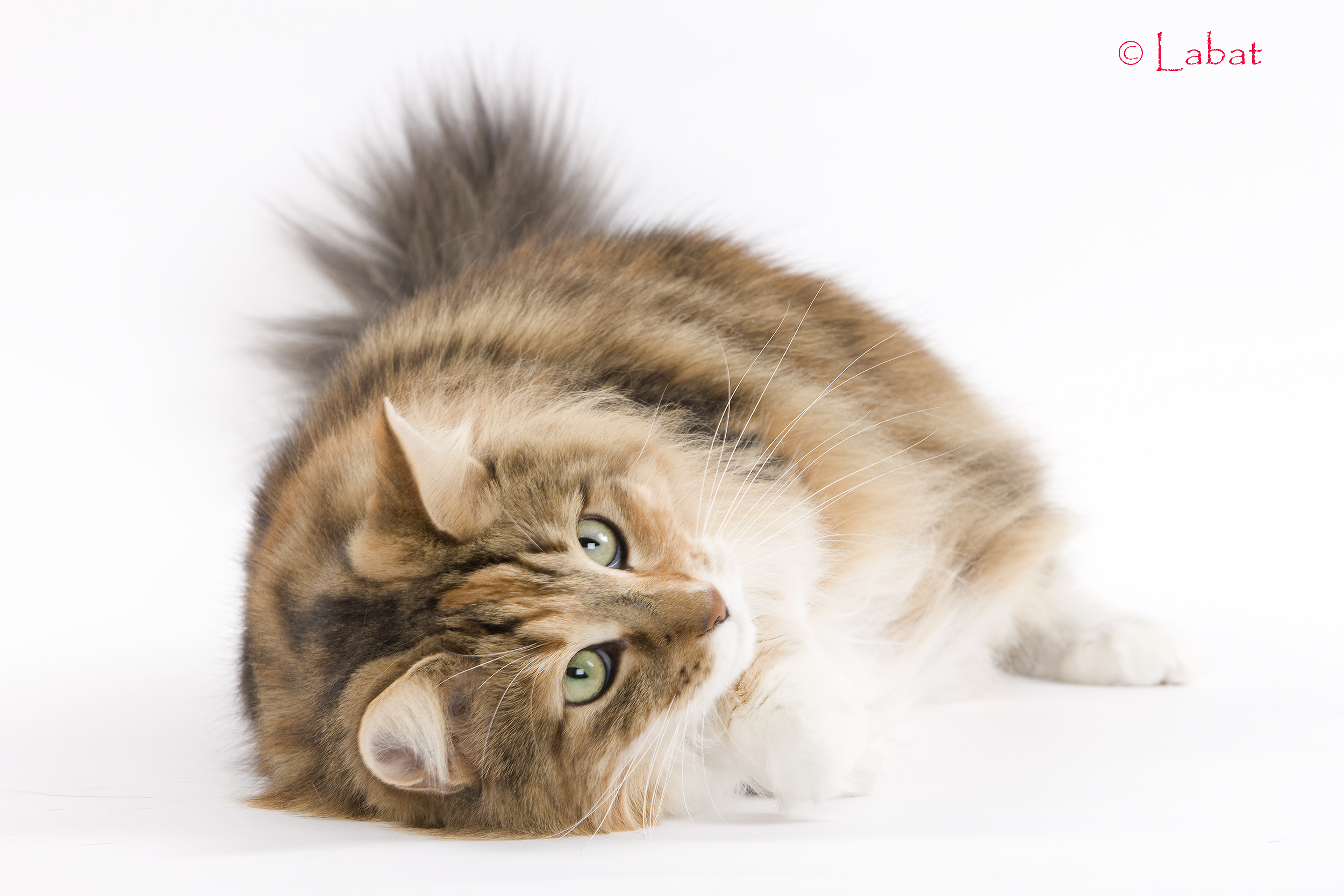 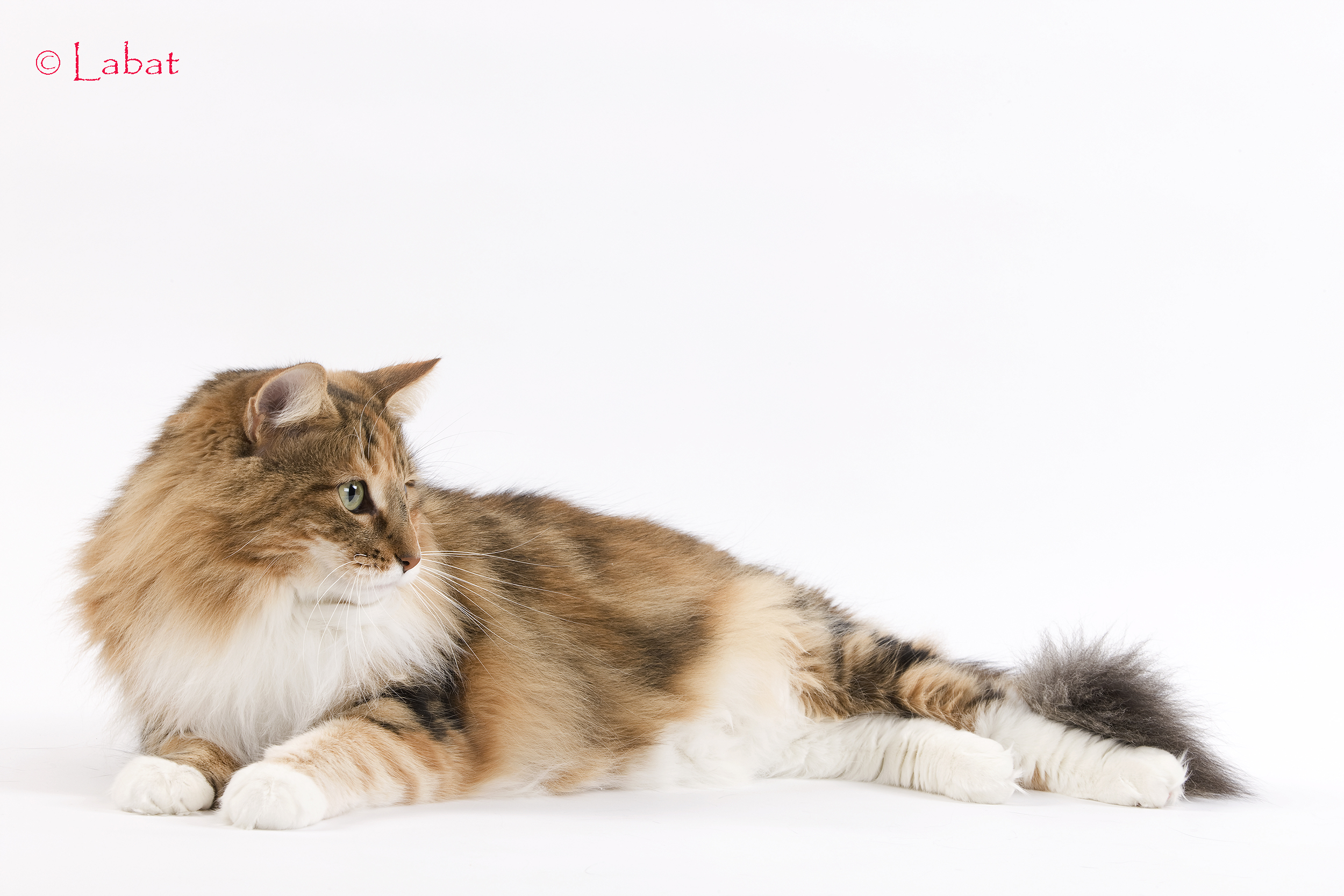 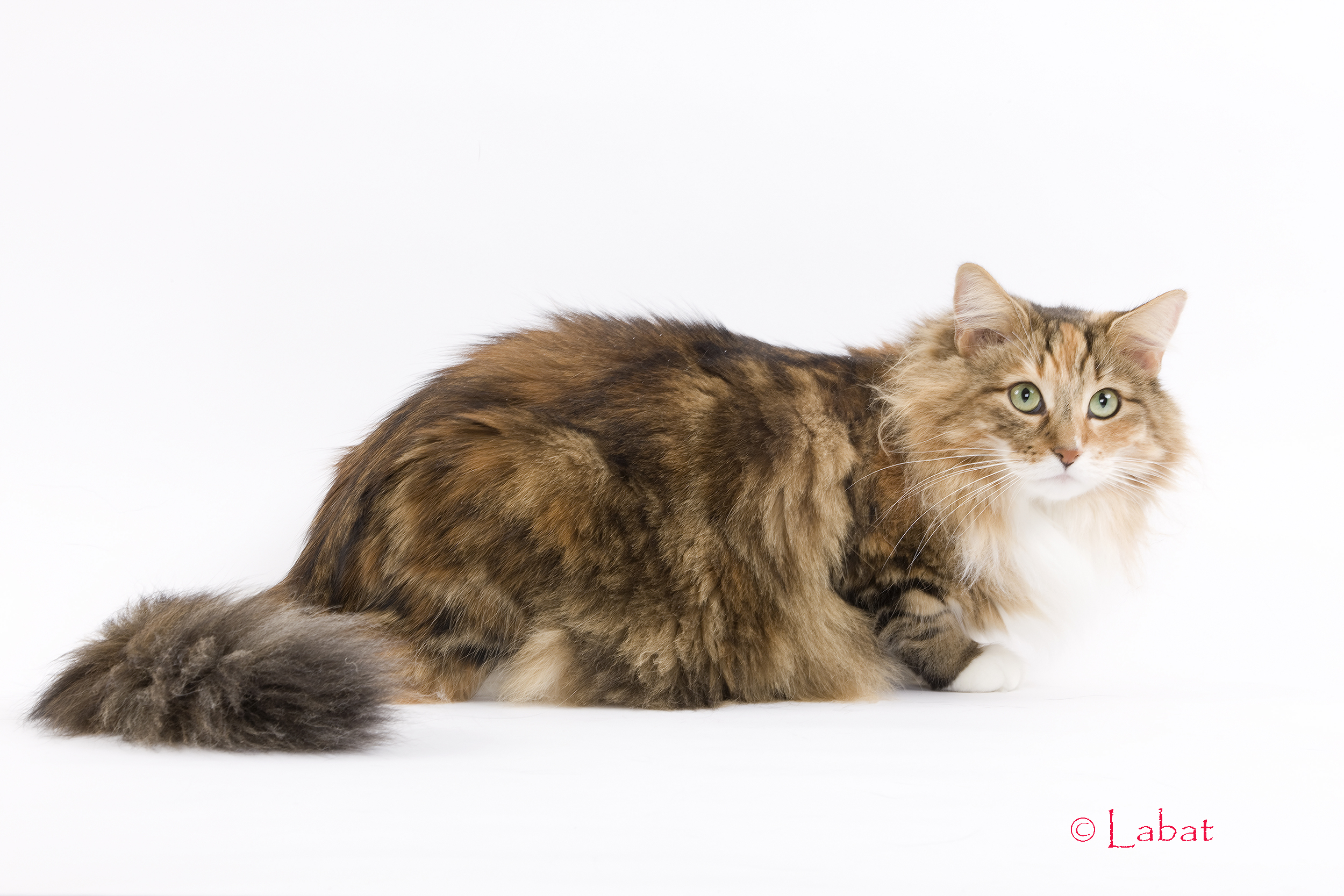 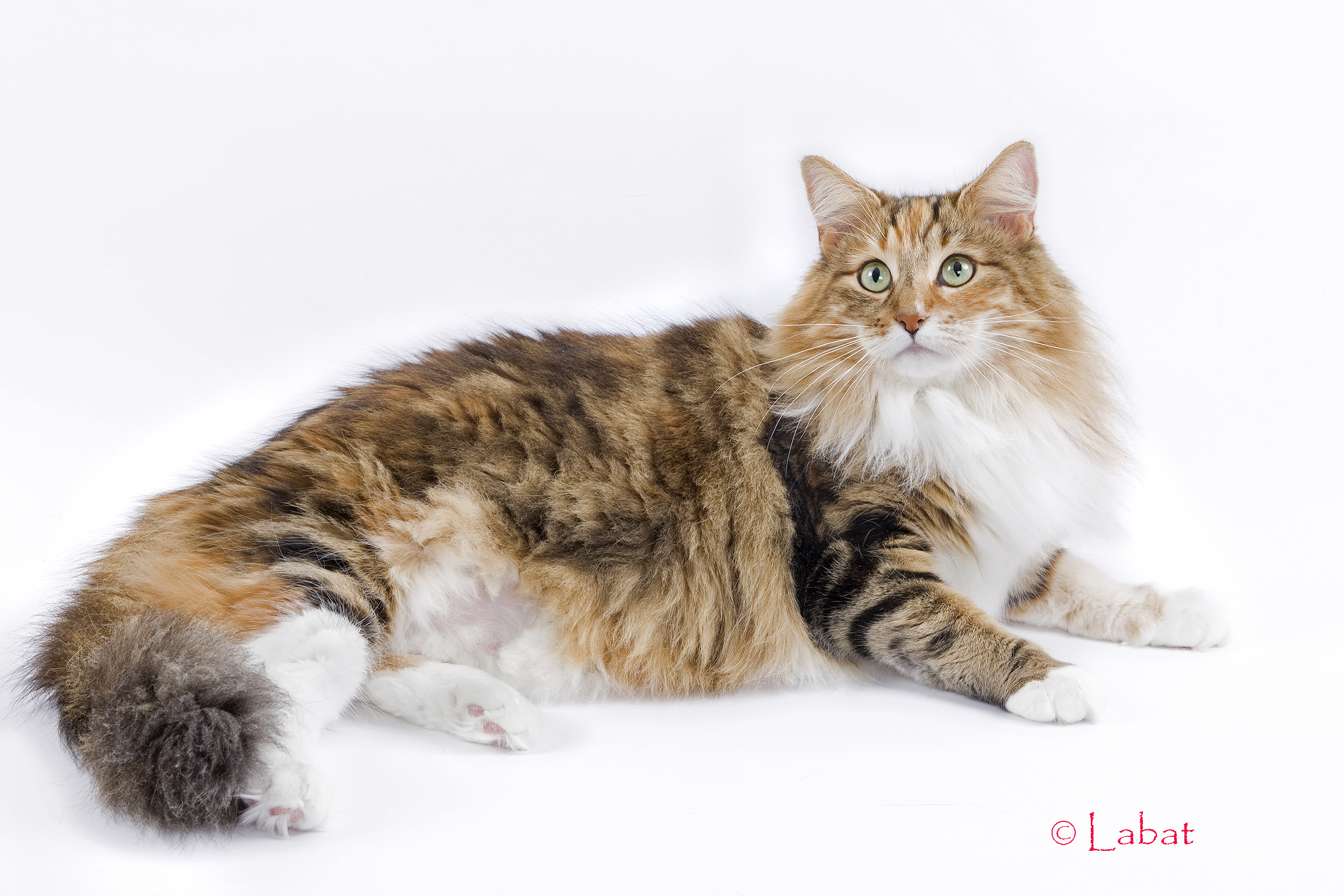 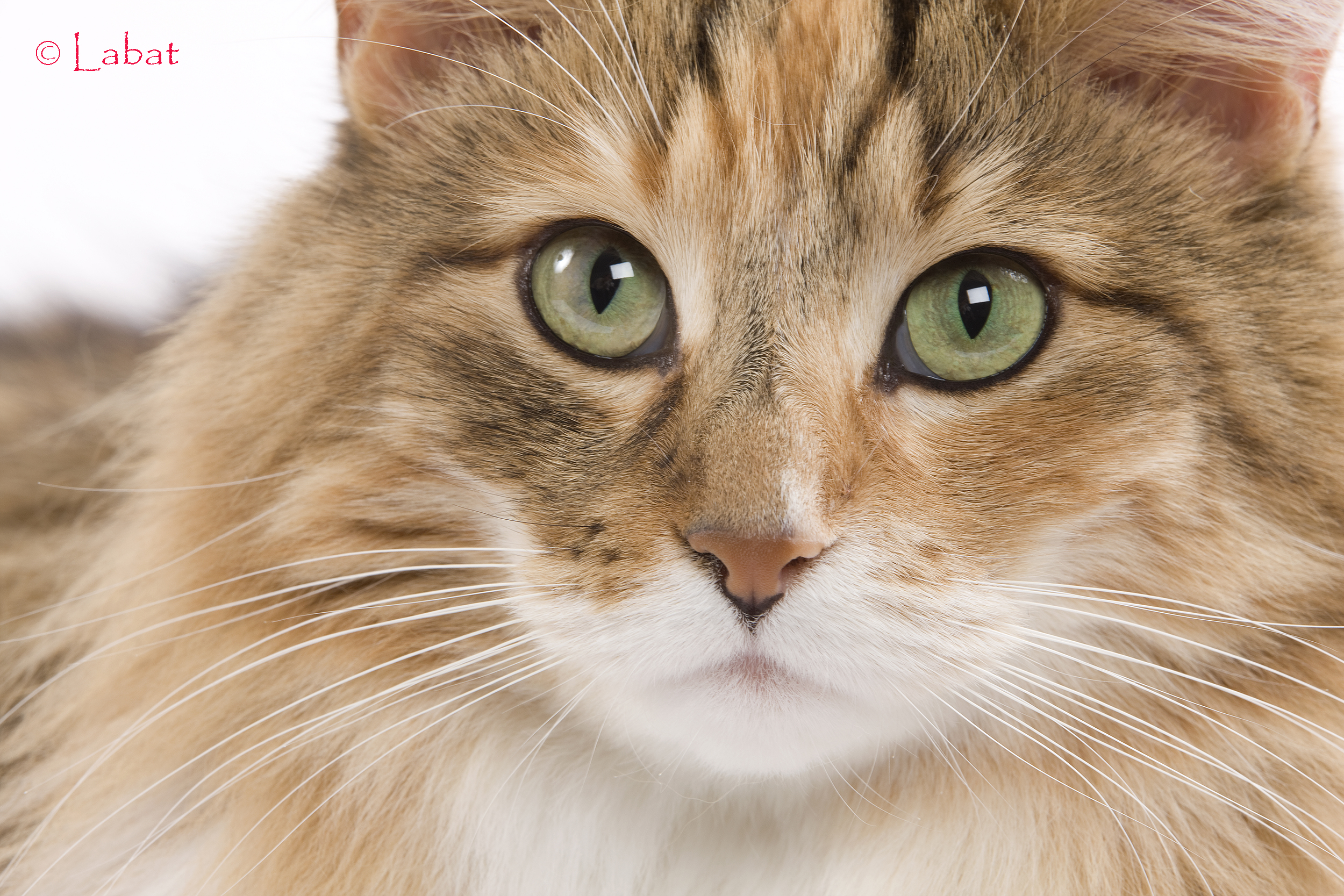 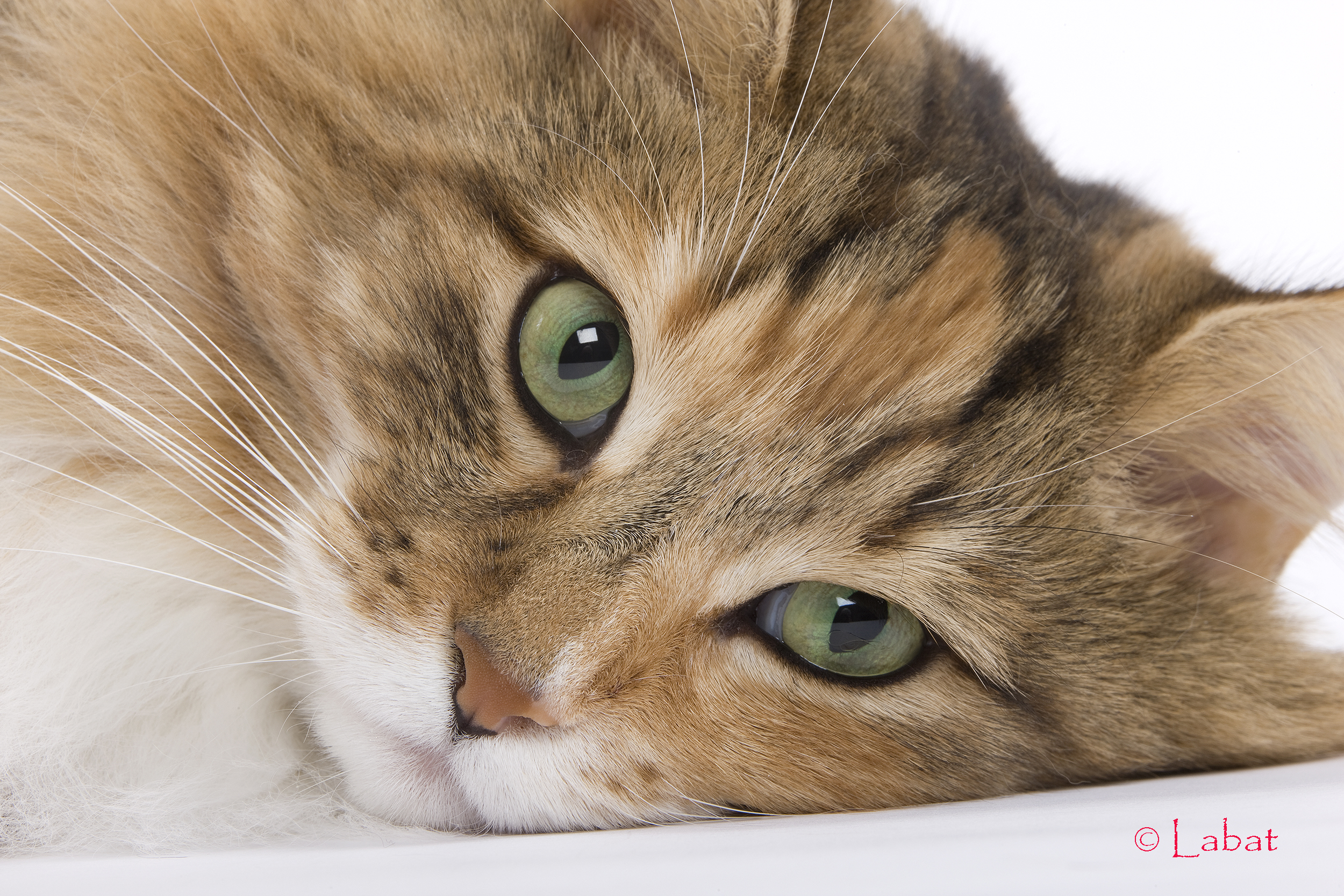 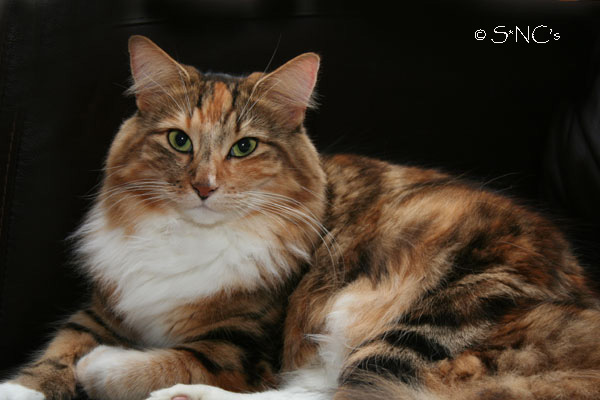 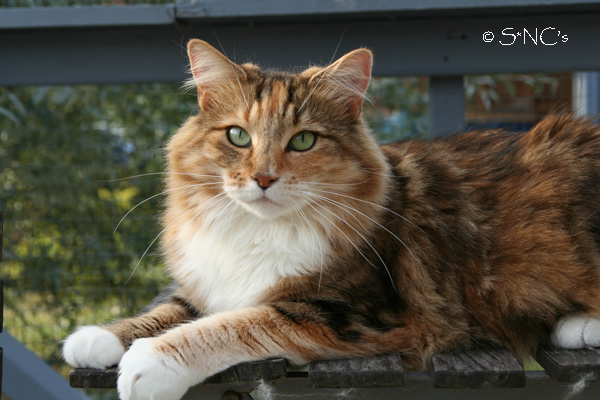 Singel is a beautiful girl and we took a trip all down to Dalby in south of Sweden for bringing her home. There she was in S*Sir Maxwell’s cattery.
Singel was the only one in the litter and that was how she got her name. We are so glad that we could have her living with us.
She is a tough little girl and beleive it or not – she’s chasing our vacuum cleaner.
She is also chasing the other cats when she wants to play.
Some of the oldes Birma cats thinks it’s to much for them!
But single is also very good to be up to mischiefs on her self and that’s because of the curiousity cat that she is.

In October 2005 Singel was Best in Show Junior at Skogkattslingans championship.
Then we decided to let Singel take a brake from catshows and instead of that she
went on a honeymoon with our Leo. Our very first litter will be born i march 2006
and it will be very interesting to se what kind of kittens Leo and Singel will give us.

At last we had our first kittens after Singel and Leo in Kiss-litter. In 9:th of March 2006 there was born four lovely kittens.
It was three boys and one girl. The boys had different colors and we were happy that one of them was blue.
It will be very exciting for us to follow their development.

In August 2006, Singel got her first title, and became Champion. In december she went to
Norway to mate a nice looking guy (N)Bytangen’s Asgeir. This guy is a son after our male ”Leo”.
This combination was bor in February 2007 and it was named to our a-ha litter.

There was 7 kittens in a-ha litter, 6 males and 1 female that stayed in our cattery.
Some of the kittens has been very successful at catshows and it will be great to follow them.
This year 2007, Singel also became International Champion and that will probobly end her show career.

In 2008 we hoped for some kittens with Vineto, our wish was some bluetortie girls,
but sometimes the plans dont work out as you wish. We have started to look for a new male to her
and we will see who it will be …..

After a long time waiting she was finally coming into heat. We decided that she should meet our
French boy Casanova. The result was 4 sweet kittens that was born 2009-05-08, Pink litter.
This was Singels last litter and she is now a retired breeding queen.

Singel was a very healthy cat except for one thing, her weightproblem.
During the years she had always gained weight even as a breeding queen, and then as a neutered
female she became more and more fat. It was not healthy for her and we started to treat her
with veterinary food, but without no effect at all. She just wanted to eat!

In May 2012 she suddenly became ill and we took her to a veterinary clinic but there was nothing to do.
Her liver was enlarged and she had a fat liver. Her diagnose was Leverlipidos & Hepatomegali.
There was nothing to do except from stoping her from suffering, our sweet and lovely Singel :-(